Opportunities to invest in global companies in Canadian dollars

Canadian stock investors who embraced a unique kind of depositary receipt that hedges against currency fluctuations ended up losing out because of the greenback’s gains.

The securities from Canadian Imperial Bank of Commerce debuted about a year ago with a novel offer -- the chance for Canadians to buy US equities without having to convert their loonies to US dollars or worry about exchange-rate risk. Instead, the depositary receipts came with annual costs of as high as 0.6 per cent that protected against US dollar weakness. As luck would have it, that worked against investors given the loonie’s 2.9 per cent slump since the securities were issued in July 2021.

After adding up the fee and the currency differential, Canadian holders of the securities did worse than they would have buying the underlying shares. For example, while Amazon.com Inc.’s US shares have dropped about 13 per cent this year in Canadian dollar terms, the CDR tracking them slumped about 16 per cent. (Investors could have fared better, depending on when they bought their securities.)

“In retrospect, it’s easy for us to look back and say, as a Monday morning quarterback, that it would have been better to use your brokerage firm and go ahead and pay that currency transaction fee,” said Arthur Hogan, the chief market strategist at B. Riley Wealth.

Still, he said, the 0.6 per cent expense is relatively cheap for a currency hedge, and the securities could hold particular appeal for active traders more interested in shorter-term investments.

The CIBC now lists 30 CDRs of American companies, many of them tech names such as Amazon, Meta Platforms Inc. and Netflix Inc. The total includes seven companies added to the lineup last week, including Coca-Cola Co., Starbucks Corp. and Verizon Communications Inc. 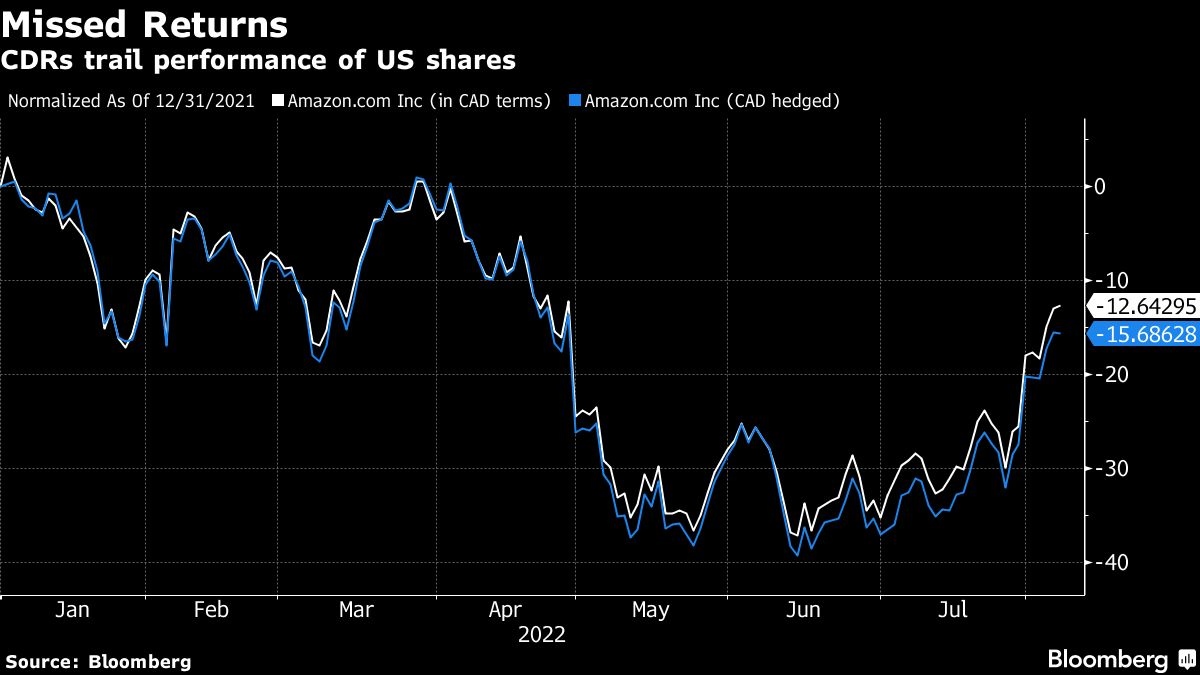 More than CUS$4 billion (US$3.1 billion) of the CDRs have traded on Toronto’s NEO Exchange since their debut, according to Elliot Scherer, the head of the wealth solutions group at CIBC Capital Markets. The market value of the CDRs totals about CUS$1 billion, he said. By comparison, the market capitalization for Canadian stocks is about CUS$3.6 trillion, according to data compiled by Bloomberg.

CIBC is looking to add depositary receipts from other countries and plans to increase the number of companies listed to 50 in the next year, Scherer said.

One downside of the CIBC receipts is that the issuer is the only bank that makes a market in the securities, sometimes resulting in wide big-ask spreads, according to Wayne Wong, the vice president of equity derivatives trading at TD Securities. He said that could change in coming years as the market develops.

“There is only one market making desk, or one broker dealer, who can provide effective long-term quotes on this product,” he said in an interview. “It needs to have more competition.”