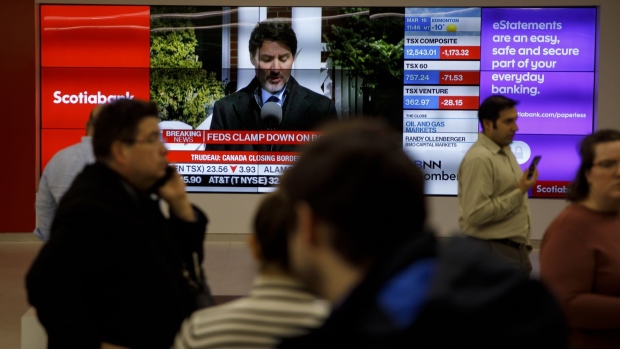 Prime Minister Justin Trudeau is seen on a screen in the financial district of Toronto, Ontario, Canada, on Monday, March 16, 2020. Canadian stocks plunged more than 9% after emergency measures from central banks failed to soothe fears the economy will suffer a heavy blow from the coronavirus. Photographer: Cole Burston/Bloomberg , Bloomberg

The S&P/TSX Composite rose as much as 1.9% before sliding 0.4% as of 10:05 a.m. in Toronto on Wednesday. This comes after the benchmark surged 12% yesterday. Trudeau’s win comes as the Trump administration struck a deal with Senate Democrats and Republicans on an historic rescue package that tees up more than $2 trillion in spending and tax breaks. Canada’s stimulus bill now needs Senate approval before becoming law.

“Ultimately the stimulus will support the economy when we get to the other side of this,” Alicia Levine, chief strategist at BNY Mellon Investment Management said on BNN Bloomberg. “The reality is that we all understand that all of our societies and economies have to be under lockdown for a while simultaneously to get through it. Rolling lockdowns are not going to do it,” she said.

For now, the economic hit Canada will take is starting to show. Last week, almost one million Canadians joined the unemployment line and two new surveys show the economic pain is just beginning. The pandemic-induced shutdown of the economy has resulted in job loss or reduced work hours for 44% of Canadian households, the Angus Reid Institute said Wednesday. Most of those who are out of work say their employers aren’t offering any emergency support.

CFIB also reported that small business confidence in Canada collapsed in March to the lowest level on record. The confidence index fell to 30.8, from 60.5 in February and widespread declines are seen in every province and industry.

Consumer discretionary, financial and real estate stocks are the best performers within the index. Consumer staples and materials were the worst performers. Crude oil fell as much as 3.6% on an unprecedented hit to consumption, while gold and copper prices were down slightly.