Canadians look to save rather than spend

Canadians appear to be in no rush to draw down about $150 billion (US$118 billion) in extra savings accumulated during the pandemic, a potential drag for the nation’s already lagging economic performance.

Almost seven in 10 Canadians say they expect to maintain or increase current savings levels over the next year, according to a survey by Nanos Research Group for Bloomberg. Only 27 per cent anticipate they will have less savings.

The poll adds to a growing list of indicators casting doubt on whether the nation’s households will ever spend government checks, among the most generous in the developed world, they received at the height of the pandemic.

While other countries have seen a similar pick up in savings, the trend has been more pronounced in Canada, and some economists worry elevated household debt levels may be one reason. Treated to larger handouts, people saved it all to shore up their balance sheets.

“Canadians will look over their shoulders at the mountain of debt and say, ‘Maybe I should use that extra money to pay down the debt burden rather than spend more,’” David Tulk, a Toronto-based portfolio manager at Fidelity Investments, said by phone. “It takes a bit away from the cyclical recovery.” 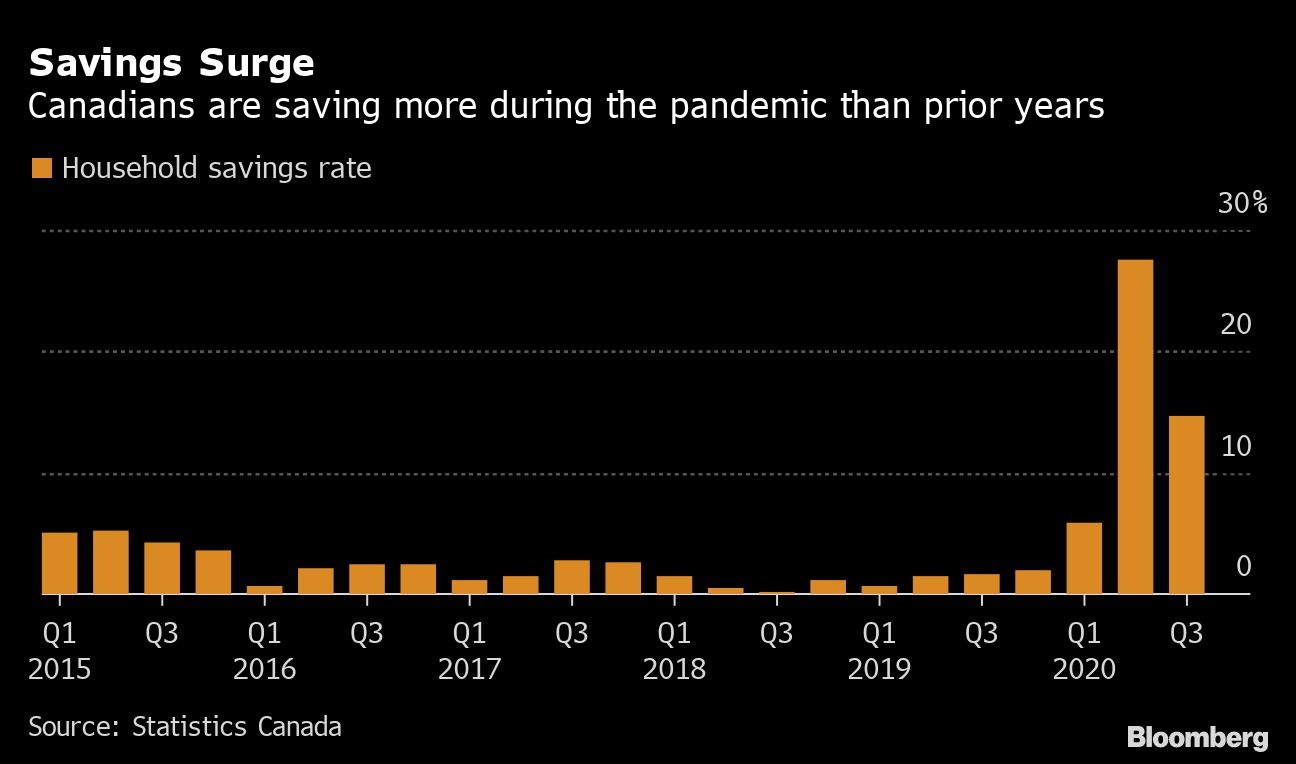 A separate poll by Nanos last month found that three out of four Canadians see their top financial priority as paying down debt or retaining an elevated level of savings. The Bank of Canada, citing its own household survey, has chosen to assume Canadians won’t spend their accumulated savings.

What happens to the cash stockpile will be critical for the pace of Canada’s post-virus recovery, since consumption makes up more than half of the country’s output. The Bank of Canada’s weaker-than-consensus outlook on consumer spending is one reason it anticipates only a 4 per cent rebound in 2021, slower than most economists are predicting. It sees the U.S. growing by 5 per cent.

Officials concede there are upside risks to their assumption, and the issue remains a point of contention among investors and economists.

Ed Devlin, founder at Devlin Capital Inc., believes the Bank of Canada may be underestimating the amount of consumption that will take place once the lockdowns are over and the economy reopens.

“We could be in for a very sharp uptick,” Devlin said in a telephone interview. A draw down of savings and more fiscal stimulus “could mean a really much more aggressive growth profile,” he said.

Pierre Ouimet, Chief Strategist at UBS Bank Canada, also believes consumers will choose to spend their savings rather than hold onto them, one reason he’s turning more bullish on Canadian equities, including consumer discretionary stocks.

“When confidence comes back, people will tend to spend money and borrow more,” Ouimet said by phone. “When they’re not confident and worried about the future, they save more.”

It’s an issue that preoccupies Prime Minister Justin Trudeau’s government. Like Ouimet, Finance Minister Chrystia Freeland believes the checks will be spent once confidence levels return. To emphasize the point, she re-branded the government’s efforts last year as “preloaded stimulus.”

Transfers to households increased by about $100 billion in the first nine months of 2020 from a year earlier. That compares with a decline of just $7 billion in household income. In other words, Canadians received $14 in transfers for every $1 lost.

Not only that, Canadian households curtailed spending by $50 billion even as their incomes soared. The net result was about $150 billion in new household savings that went unspent.

The U.S. response was similar -- with mass handouts leading to higher savings as consumers held back from spending, largely because they couldn’t due to lockdowns.

But the swing in Canadian savings has been even more pronounced -- a combination of larger payouts and tougher Covid restrictions.

To be sure, even if consumers don’t spend the government checks, their improved finances will mean they can borrow and spend in the future. That’s on top of wealth gains recorded last year from soaring home prices and stock markets.

As consumers buy more homes, they will also need to purchase items to furnish them, another reason to be optimistic on spending, according to Beata Caranci, chief economist at Toronto-Dominion Bank.

“There’s a lot of potential just in the link between sales and the spending that goes with it,” Caranci said by phone. “Then excess savings and the fact that every time we do reopen the economy, we see consumers respond, so the willingness does seem to be there.”