Aphria beats profit expectations, reaffirms guidance of up to $700M in annual revenue

Cannabis producer Aphria is becoming something of a rarity in the cannabis space – a profitable company. The Leamington, Ont.-based pot producer reported $16.4 million in net income in the first quarter of fiscal 2020 or seven cents per share for its second straight quarter of profitability, the company announced Tuesday. Aphria reported $30.8 million in cannabis revenue in the quarter selling 5,969 kilograms of dried flower, up from $28.6 million and 5,574 kilograms in the prior three-month period. Aphria reaffirmed its forecast for fiscal 2020 with revenue projections between $650 million to $700 million, with its German distribution business representing slightly more than half of the total net revenue. During a conference call with analysts, interim CEO Irwin Simon said Health Canada is “expediting” a cultivation licence for its Diamond facility, which can produce about 125,000 kilograms of pot annually.

CannTrust is planning to destroy approximately $77 million worth of cannabis as the embattled pot producer seeks a return back to compliance with regulators. The company said in a release late Monday that it plans to destroy approximately $12 million worth of biological assets and $65 million worth of inventory that wasn’t authorized under the company’s licence, including material that was returned by patients, distributors and retailers. CannTrust also said it will not challenge Health Canada’s Sept. 17 decision to suspend the company’s sales and production licences and that it plans to send a detailed remediation plan to regulators next week.

Canopy Growth said Tuesday it plans to divest its stake in AusCann Group Holdings, a supplier of medical cannabis to the Australian market. Canopy said it expects to make $6.3 million after selling its 13.2-per-cent stake in AusCann via an off-market block trade. Despite the asset sale, Canopy won’t be leaving Australia entirely. It already operates a unit of its Spectrum Therapeutics medical cannabis in the country. Jefferies analyst Owen Bennett said that while the proceeds are a small fraction of the $2.3 billion in cash the company has on hand, “we believe it is evidence of Canopy now beginning to clear its balance sheet to put more focus on core assets and the goal of profitability.”

A year after cannabis was legalized in Canada, the industry is being credited with a notable impact on home sales and prices in some Canadian markets. According to RE/MAX, the housing economy in the Rideau-St. Lawrence area – which is home to Canopy Growth’s headquarters in Smiths Falls, Ont. – is in the middle of a boom. RE/MAX reports home sales are up 27.1 per cent year-over-year and average prices increased 10.5 per cent. Other Canadian pot hot spots flagged by RE/MAX include Windsor-Essex, which is the home to Aphria and several other large cannabis producers. Home sales in that area increased 7.82 per cent and average prices rose 9.10 per cent year-over-year.

It’s another supply deal gone south with Village Farms International and Emerald Health disputing a payment relating to a joint venture between the two companies. Village Farms said in a release on Tuesday that Emerald owes the Pure Sunfarms joint venture approximately $7 million in “price deficiency obligations” after a wholesale market price decrease for cannabis in the three months ended Sept. 30 resulted in lower margins. Emerald Health fired back with a release of its own, disputing the charge and requesting that this issue be addressed at the upcoming meeting of the Pure Sunfarms board of directors.

$9.58 million
-- The total compensation for Aphria interim CEO Irwin Simon in 2019, according to company security filings. 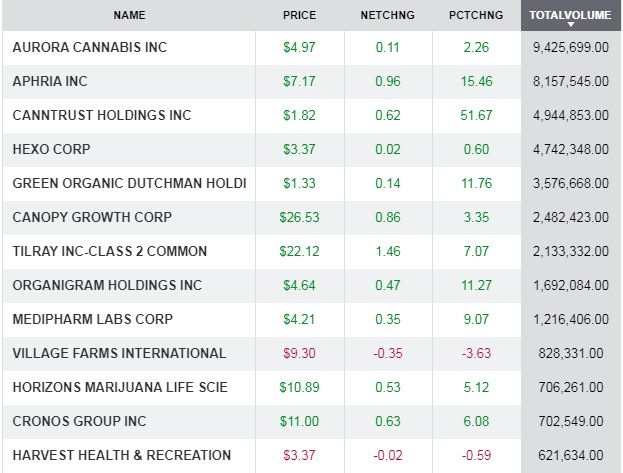