Shares of CannTrust plunged on Monday, closing down more than 20 per cent after the cannabis producer said it was found to be non-compliant with certain Health Canada regulations at one of its facilities in Ontario. CannTrust said Health Canada – which is responsible for regulating legal pot – flagged production that was underway in five unlicensed rooms at its Pelham, Ont. greenhouse between last October and March. The regulator placed 5,200 kilograms of cannabis grown at those locations on hold, while the company voluntarily placed a hold on an additional 7,500 kg of dried cannabis equivalent at another facility. The company also said the impact on financial results from these incidents is unknown.

CannTrust’s news highlights how legal pot operators face a “wake-up call” to improve governance and compliance standards, according to a top cannabis lawyer specializing in the industry. “What we’re seeing now are these growing pains that have to be rectified immediately because it brings a dark cloud over the industry,” said Eric Foster, partner at Dentons and co-head of the Toronto-based law firm’s cannabis practice. The cannabis sector has been under the microscope after several governance and operational-related issues rocked the industry, including developments at Aphria and Canopy Growth, two of the bigger players in the pot space. One governance expert said cannabis companies need to begin appointing more independent board members and chairs to ensure that compliance and regulatory risks are under control.

Cannabis ETFs getting crowded despite concerns of waning interest

Investors who have taken interest in the growing cannabis ETF space may face a “day of reckoning” within the next couple of years, according to one leading Canadian banker specializing in the financial product. That’s likely due to fading demand amid the increasing number of exchange-traded funds focused on marijuana. While there seems to be enough demand to keep the flow of new funds coming, will investors ultimately stick around? One analyst believes there’s only room for two, maybe three, big successes “and then the law of diminishing returns kicks in.”

-- The amount of cannabis private retail sales in Canada in the month of June, up 29 per cent from April, according to Cova Software, which provides point-of-sale services for North American cannabis retailers. These sales estimates are based on tracking 256 private Canadian cannabis stores, up from the 219 stores tracked in May. The average cannabis sales per store also increased 10 per cent to $307,082 per store in June. 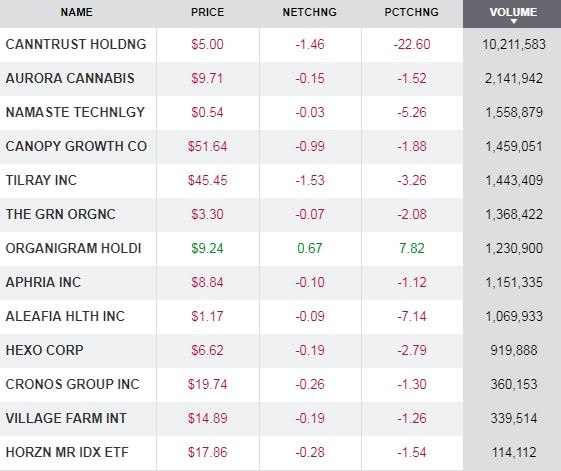