For weeks, retailers and cannabis producers started preparing the paperwork to apply for the licences needed to open up pot stores in Ontario this April. On Friday, that work was effectively thrown out as the province reversed course on its earlier pot retail plans, announcing it now wants to cap the total licences at just 25. Those licences will only be granted via a highly-anticipated lottery that will take place in January. BNN Bloomberg’s David George-Cosh said Ontario’s move could be a significant blow to the nascent sector as government officials cite a nationwide supply shortfall as the reason for limiting the shops that can open in April. RioCan CEO Ed Sonshine said the company signed leases for 26 locations that include more than $2 million for retailers looking to secure prime locations. He expects the rollout of legal pot shops to be slower than expected due to the supply issues engulfing the Canadian cannabis space.

Canadian cannabis producer Hexo Corp. reported a surge in revenue in its first fiscal quarter of 2019 thanks to selling $5.2 million worth of recreational cannabis during the first two weeks of legalization. The Quebec-based company said its adult-use sales during the first two weeks totalled more than the licensed producer's $4.9 million in medical use sales in its entire 2018 financial year. Meanwhile, Moncton, N.B.-based Organigram reported its full-year 2018 results Friday, recording $12.4 million in sales in the year, up 131 per cent compared to 2017, while more than doubling its medical patient registrations to 15,730.

Waterloo looks to brew up some pot-infused beverages

There’s another brewery looking to get into the cannabis infused drink space. Waterloo Brewing, the parent company of Brick Brewery, announced it’s preparing for pot-infused beverage production later this year and has retained a consultant to secure the licences from Health Canada needed to start that process. The company said development and commercial production of its upcoming cannabis-infused non-alcoholic beers, teas and flavored waters are planned for October 2019 when edible food and drinks that contain marijuana  are slated to be legalized in Canada.

Africa held its first cannabis expo on Thursday with one notable absence… There was no cannabis to be found. The event, held in South Africa, was a stark reminder of the legal grey area the industry occupies in the country, which recently decriminalized the use and cultivation of cannabis in private spaces. Expo participants had to be creative, using two artificial poinsettias as cannabis plant stand-ins, while activists handed out free dried flower before security officials escorted them out of the building.

“Retail is not for the faint of heart.” 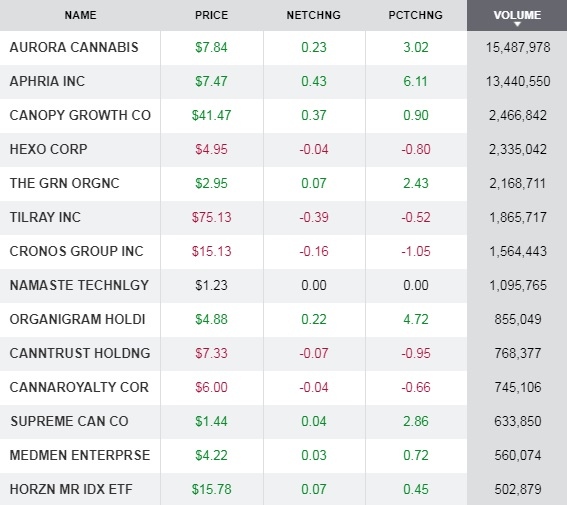