It's been two years since recreational cannabis was legalized in Canada and the country is filled to the brim with pot. Licensed producers have hundreds of thousands of kilograms stuck in vaults, while provincial distributors are stocking up on packaged products - all while Croptober looms and outdoor harvests begin. As we look back on the past two years of legalization, it's clear that Canada has a cannabis supply problem - one that has weighed on producers, big and small alike, which have had to write down and destroy billions of dollars in inventory and assets. There are now 507 producers Health Canada has licensed to grow cannabis legally, with roughly 60 of them selling into the recreational market. Meanwhile, more than 1,200 pot shops are open across Canada, with Ontario - the country's most populous province, opening 40 new stores each month.

Vivo Cannabis said Friday it is pulling a planned $5.1 million offering after observing highly unusual trading activity in the company's shares two days after it first announced its financing plans. Vivo said that trading volume of its stock increased by approximately 8,000 per cent to 18,980,048 shares, compared with 236,517 shares traded in the two days prior to the announcement. Vivo's management said in a statement it reported the trading activity to regulators, but didn't disclose whether it planned to try to raise additional financing. Separately, Auxly Cannabis issued a release on Friday also disclosing that it informed regulators that there has been no material change to its operations following an inquiry from the Investment Industry Regulatory Organization of Canada after its stock doubled in price over the past week.

Shares of U.S. cannabis retailer MedMen Enterprises touched a new all-time low on Friday after the company reported its fourth-quarter results where revenue plunged 40 per cent to US$27.4 million. The company attributed the sales drop to a myriad of factors including slower customer traffic in its Los Angeles and Las Vegas locations, a store shutdown in Nevada, COVID-19 and civil unrest. MedMen also booked a US$240 million impairment charge for its cultivation and manufacturing facilities. Canaccord Genuity analyst Matt Bottomley reduced his price target to the company's stock to zero following the company's results, stating MedMen has "cast significant doubt on the company’s ability to execute its turnaround strategy to reach profitability." 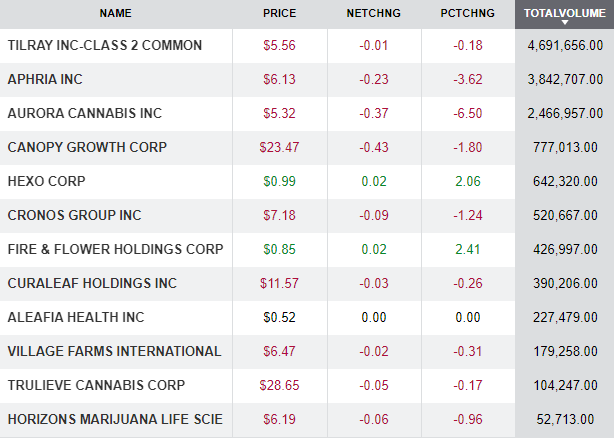