What else does Irwin Simon have up his sleeve?

When Simon came on board as Aphria Inc.’s chairman and interim chief executive officer roughly two years ago, the former organic food executive had his hands full trying to unwind a damaging short-seller report whose allegations led to a sharp decline in the company's stock.

Fast forward to this week and Aphria's fortunes appear to have turned around. The Leamington, Ont.-based company is Canada’s leader by market share, and it’s looking to further solidify that lead after it closes its deal to merge with Tilray Inc. by the end of the second quarter.

Now, Simon is looking ahead to the company's next big moves. While that is more than likely to occur in the U.S., he has some ideas on how to expand the Canadian industry further this year, notably letting licensed producers sell directly to customers.

"This year, cannabis will now be legal for three years and there has to be change in Canada in regards to how we educate consumers about products," Simon said. "E-commerce has got to be part of this [year’s change]."

Right now, cannabis is sold through a patchwork of various provincial regulations that essentially leave control of the sale to each province. While only Saskatchewan has a liberal system that allows for cannabis companies to manage their distribution and supply, Simon said he'd like that to be opened up further.

In addition to further liberalization of cannabis sales in the country, Simon said he also thinks that Canadian producers should be allowed to export their regulated product south of the border once the U.S. opts to legalize marijuana.

"If New York tomorrow opens up, they don't have the ability to supply New Yorkers," he said. "Would the U.S. allow Canadian cannabis companies to supply some of these places? The grow is there, the regards to regulation [and quality] are there … and Canada has had a good three-year head start on that."

That is a fairly bold statement to make that doesn't account for the myriad of red tape and regulations that currently are in place to limit the trade of cannabis between Canada and other countries. But Simon does note that he already has a big growing facility and the likelihood that the U.S. market eventually builds too many greenhouses than the market can handle – similar to what Canada experiences – is high.

"They're going to run into similar problems that ran into Canada," Simon said. "That's a big wish. You probably think I'm crazy."

After Aphria's second-quarter results beat expectations, causing the company's stock to soar, the Canadian pot giant is still keeping its focus sharply tuned to the U.S. market. While Aphria isn't able to directly compete in the U.S. pot market due to stock exchange restrictions, it does have brand access through its Sweetwater Brewing subsidiary and soon, hemp food maker Manitoba Harvest. But Aphria CEO Irwin Simon is steadfast that the company has to have a firm U.S. plan once the country legalizes cannabis. When that happens, "we will have either the ability to buy [or] merge with somebody. We all have the ability to greenfield if we have to do that, because we've got to be in the U.S.," Simon said.

Thanks in large part to optimism surrounding the Georgia Senate run-off election results that will give the Democratic Party control of Congress in addition to the White House, cannabis has been one of the biggest winners of the new year. The valuations of most pot stocks have been trading around record highs. Shares of U.S. operators like Curaleaf and Cresco Labs are posting outsized gains, while several Canadian players are following suit. Some investors see momentum in the pot space extending after last year's November election results spurred the opening of five new U.S. states. As well, worries of a bubble in the U.S. cannabis sector may not be there yet given the low valuations still seen among many companies.

Molson Coors Beverage Co. launched a new CBD-infused drink in the U.S., the first cannabis beverage the beer maker is making available in the world's biggest marijuana market. The drink, named Veryvell, is one of the company's new offerings from its emerging growth division, which has already launched coffee and energy beverages. The drinks are made through Truss, Molson's joint-venture with Canadian pot producer Hexo, which already has several products for sale in Canada. The CBD drinks will retail for US$3.99 for a 12-ounce can and US$14.99 for a four-pack.

It turns out the single-gram cannabis package is losing its lustre as U.S. and Canadian consumers opt for larger product formats, Marijuana Business Daily reports. The industry news site reported that sales of one-gram products in three Canadian provinces dropped to about 201,000, down about 57 per cent, while sales in some U.S. states fell about one-third. Headset, the data firm that provided the sales figures, attributes the decline to shoppers going out less during the COVID-19 pandemic, and buying more economical products.

Mixed martial arts promotion UFC will no longer penalize its athletes who test positive for cannabis, the company said Thursday. The United States Anti-Doping Agency, which partners with the UFC to test its fighters for unapproved drugs, said it will no longer consider a positive drug test for carboxy-THC as a violation, unless it was determined to be intentionally used for performance-enhancing purposes. ESPN reported that this essentially means the league will "essentially" de-emphasize marijuana sanctions completely. UFC previously had an agreement with Aurora Cannabis to develop CBD-infused products for athletes, but that deal was cancelled earlier this year.

Cresco Labs led a deal to acquire Florida medical cannabis operator Bluma Wellness on Thursday in an all-stock acquisition valued at US$213 million. The deal, which will see one of the biggest U.S. pot companies move into one of the fastest-growing U.S. cannabis markets, was lauded by investors and analysts alike, pushing Cresco's stock up 26 per cent this week. Beacon Research upped its 12-month price target on Cresco to $20 a share, while leaving their "buy" recommendation unchanged. Beacon cited the company's strength in the wholesale market and chances that Florida will legalize cannabis for adult-use in late 2022.

CANNABIS SPOT PRICE: $5.87 per gram -- This week's price is down 1.6 per cent from the prior week, according to the Cannabis Benchmark’s Canada Cannabis Spot Index. This equates to US$2,095 per pound at current exchange rates.

"If Mexico is implementing a legalization program, sharing such a vast border with the United States, it signals the end of an era, I believe."
- Jordan Lewis, CEO of Fotmer Life Sciences, a Uruguay-based medical cannabis producer, to Leafly on how Mexico's move to regulate the legal use of medicinal cannabis may be a tipping point for the rest of the world. 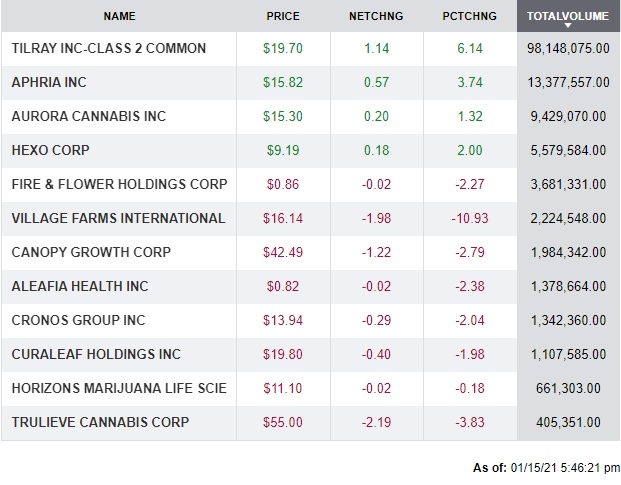