Canopy Growth Corp. and Aurora Cannabis Inc. are rethinking their strategies in the Canadian cannabis market – and are choosing different approaches - after their latest quarterly results showed a continued decline in sales.

Amid an eight per cent fall in its cannabis revenue, notably a 28 per cent decline in its business-to-consumer sales, Canopy is revisiting how it grows cannabis in the Canadian market with a plan to improve quality and focus on more premium products.

Canopy's Chief Executive Officer David Klein told BNN Bloomberg in an interview that the company is converting its three remaining production facilities to concentrate on premium, high-end cannabis products through harvesting techniques such as hang-drying to improve terpene profiles and increase potency levels.

"We're really focused on premium and mainstream [products], understanding that [it’s] going to cost us market share in aggregate," Klein said. "The good news is it's taken us a while to get our production techniques and assets in line in order to produce that high THC but we're starting to see a lot of that hit the market now and we're getting really good response from consumers and budtenders. So we're going to keep driving in that direction." 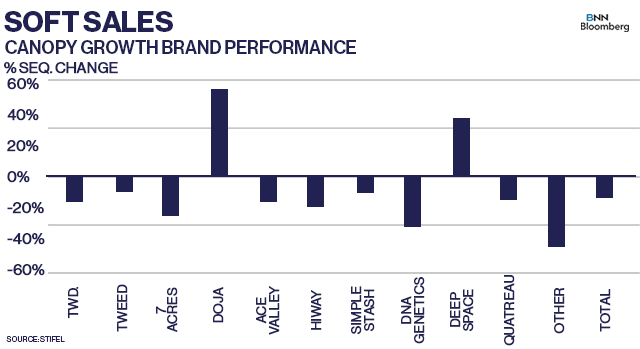 The product improvement comes following images on social media that showed cannabis plants covered in powdery mildew, a type of mould, grown in what was initially described as a Canopy facility. A Canopy spokesperson later confirmed on background that the images were accurate, although the plants were disposed of and the room itself was disinfected.

"Those plants were never going to be sold, the room had already been shut down," Klein said. "The particular strain we were growing in that room was Penelope which is susceptible to powdery mildew."

Klein later said the company is introducing new cannabis genetics that will provide more consistency in terms of being bug and mould resistant and is "constantly working" to produce the best quality plants.

"It makes for interesting pictures on social media but there's nobody that's grown cannabis at scale that hasn't had issues with powdery mildew," he said. "There was no way that those plants were ever going to produce anything that ended up in a bag."

Improved plant genetics has also been a big focus for Aurora as it shifts its approach to a more medical or science-backed strategy to target consumers in both the recreational and medical markets. While it has found more success in selling to patients, its stock has tumbled amid investor jitters over falling share in the Canadian recreational space, which is roughly 10 times the size of the medical marijuana market. Aurora remains the top medical marijuana producer in Canada and its sales in that category rose 18 per cent to $45.7 million.

Aurora's Chief Executive Officer Miguel Martin said the company will still remain in the recreational market - even as its share tumbles to the low-single-digits - as there remain efficiencies in selling to both adult-use and medical segments, while the amount of products it is allowed to list by provincial wholesalers is still relatively valuable to them. They have, he noted, reduced the number of products and eliminated such offerings as infused candies and chocolates that "don't make sense from a financial standpoint."

"Profitability is our primary focus," Martin said. "As people look at the impact of [the recreational market] to the [profit and loss statement], closing down our Polaris and Sun facilities are almost entirely connected to what we did in the rec business. The other parts of our business are growing."

He is happy for Aurora to remain on the sidelines to avoid the cutthroat nature of the current market where there is a steady race to the bottom, which ultimately will lead to some companies either filing for bankruptcy or getting bought by bigger players.

"My opinion is that it will take at least another year to bottom out. You've got retailers struggling, you've got probably the top five [licensed producers] losing half a billion dollars in the next 12 months," Martin said.

Hexo continues to make operational changes as the company urgently tries to become profitable in order to avoid defaulting on one of its loans. The company announced Wednesday that it would lay off 180 staff, mostly at one of its production facilities in Nova Scotia to help save $15 million a year. The layoffs are part of Hexo's turnaround plan, which was first disclosed in December, to generate approximately $37.5 million this fiscal year in new cash flow and about $135 million in its next fiscal year. Hexo is currently embroiled in a boardroom battle with an activist investor as well as a non-compliance status from the Nasdaq exchange on maintaining minimum bid price requirements.

Aurora Cannabis reported second-quarter results late Thursday that showed a 10 per cent drop in its revenue while incurring a $75.1 million loss. Aurora's recreational cannabis sales also took a significant hit in the quarter, falling by about 48 per cent as the company maintained a strong focus on its domestic and international medical business. Despite the balance sheet declines, the company's sales and EBITDA figures were slightly ahead of analyst expectations. Analysts broadly reduced their 12-month price target on Aurora's shares following the Q2 results, with Canaccord Genuity's Matt Bottomley telling clients in a report that the company will face margin pressure next quarter as its Canadian recreational revenues will likely make up a greater percentage of its sales.

Shares of Canopy Growth spiked higher on Wednesday after the company reported third-quarter results that were above expectations despite reporting a steep decline in its cannabis sales. Canopy reported its third-quarter revenue fell by eight per cent to $141 million while posting an adjusted EBITDA loss of $67.4 million. Its pot business saw an eight per cent sales decline as well to $83 million while gross margins tumbled to seven per cent, from 16 per cent. Canopy CEO David Klein said the company is keeping an eye on its U.S. strategy, where it has seen some optimistic sales opportunities, notably in its BioSteel and CBD business.

Sentiment toward legalizing cannabis in the U.S. got another shot in the arm this week after Senate Majority Leader Chuck Schumer announced he plans to unveil his broad marijuana reform bill this April. Industry news site Marijuana Moment said Schumer plans to double-down on his outreach on making federal cannabis legalization a priority this year through the Cannabis Administration & Opportunity Act (CAOA). Schumer's comments come after U.S. Representative Nancy Mace appeared on BNN Bloomberg to discuss her legalization bill that would introduce a nationwide excise tax while also winning the support from online retail giant Amazon.

While some eyes will be focused on Super Bowl LVI where the Cincinnati Bengals look to win their first championship against the Los Angeles Rams, others will be tuned to the game's commercials. One such pricey ad will come from Weedmaps, which highlights how cannabis itself has found itself in the crosshairs of censors by using an office worker named Brock Ollie, whose head resembles a head of broccoli. Broccoli is often used as a subtle stand-in for cannabis on social media platforms to avoid getting banned for speaking about cannabis. Super Bowl weekend is often a big sales driver for the cannabis industry as people stock up ahead of the big game, according to marketing technology company Surfside Solutions.

Stifel on the Canadian industry outlook

Stifel Analyst Andrew Carter takes a look at how the Canadian recreational cannabis industry is faring following the release of January sales figures from industry data provider Headset. The analysis focuses on sales in Alberta, British Columbia, Ontario, and Saskatchewan, where retail activity appears to have increased by about one-third from a year ago, Carter said.

The industry, however, continues to be fragmented with roughly 250 licensed producers selling into the four provinces that Headset tracks, more than double the count from a year earlier. As well, the amount of market share held by producers outside of the top-ten rankings increased by 18 percentage points to 43 per cent, a sign that those smaller players continue to nip at the heels of larger and better-capitalized companies. "Competition continues to increase both at the producer and retail level, and the sector’s inefficient capital flows have enabled irrational behavior," he noted. 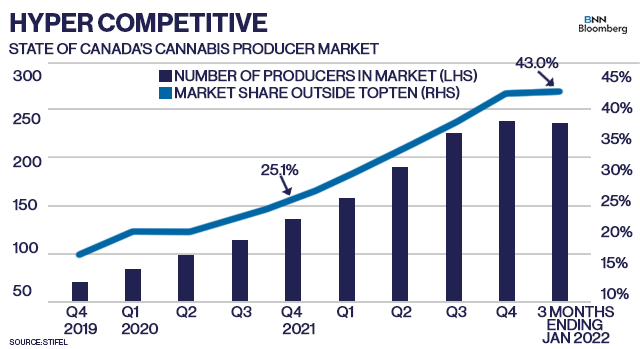 Carter now forecasts that cannabis sales in Canada will grow to $5.9 billion by 2023, which suggests a 22 per cent growth rate over the next two years. Those sales gains come amid a steep decline in dried flower and vape product prices, down 16 per cent and 39 per cent, respectively. "While multiple producers have suggested that there is provincial board interest in establishing price floors, the fixed excise tax structure makes the provinces agnostic to prices, given they receive 75 per cent of federal cannabis excise tax revenue," Carter said.

This week's price is up 1.7 per cent from the prior week, according to the Cannabis Benchmark’s Canada Cannabis Spot Index. This equates to US$1,834 per pound at current exchange rates.

- The amount of cannabis sold in Colorado last year, a new record, according to the state's Department of Revenue.