With consumers yet to fully embrace cannabis-infused drinks, it was notable to see another company take steps to enter the Canadian market.

Cann, one of the most popular cannabis drinks in the U.S. and backed by a laundry list of celebrities, announced plans to enter the Canadian market earlier this week through a partnership with Truss Beverages, the joint venture between Hexo Corp. and Molson Coors Beverage Co.

The company also announced that it raised US$27 million in early-stage financing with a slew of celebrity investors including Canadian actress Nina Dobrev, comedian Adam Devine and Rosario Dawson, who also sits on Cann's board.

Luke Anderson, one of Cann's co-founders who started the company in 2018 following a stint as a consultant at Bain & Co., said the company is targeting users who are looking to scale back on their alcohol use with a low-potency product that doesn't make them feel bad the next day.

"[Cannabis] beverages have historically been largely unsuccessful except for us," he said in an interview. "We were one of the only cannabis companies that continues to nearly triple in size, year after year. I think the reason for that is we're accessing a totally new consumer that's not interested in other types of cannabis."

Cann's products have a 16.9 per cent share of the cannabis beverage market in California - good enough for the top spot, while they rank second in Nevada with a 14.1 per cent share, according to Headset data. Sales figures were not immediately available, but Anderson said the company has sold 10 million cans of the beverage since its launch.

While Cann may be atop the drinks market, it is still a relatively unproven category. Infused drinks account for between one to two per cent of the total cannabis market in both the U.S. and Canada. 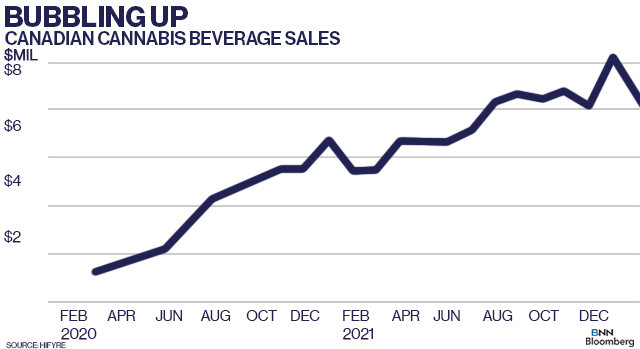 It generates roughly $7 million to $8 million in monthly sales in Canada, despite being backed by some of the biggest names in the industry such as Molson and Constellation Brands Inc. That investment gap is beginning to raise questions as to why are alcohol companies are spending millions of dollars entering a product category that has yet to gain a strong foothold amongst fickle consumers.

"That really is the Holy Grail if you can figure it out," said Andrew Carter, an analyst who covers several U.S. and Canadian cannabis companies for Stifel, in an interview. He said there remains interest from casual consumers in pot drinks given the relatively familiar beverage format, while alcohol companies are looking to invest in a product that can help bridge declining sales of beer and liquor.

Carter also added that it is odd for Truss to work with Cann on their Canadian launch, given they already lead the Canadian cannabis beverage market and the tie-up risks cannibalizing their own sales.

"Going out and signing a licensing deal with a U.S. brand that's hot isn't going to do anything for you," he said.

Anderson said that Cann decided to work with Truss because both companies lead the product segment in their respective markets and that "winners work with winners."

"One of the reasons why beverages do not work right now is everyone is fighting for their own share, rather than working collaboratively to take a share from unwanted alcohol consumption," he said.

"And that Molson Coors is brave enough to invest in a category that could threaten the share of alcohol that's consumed, that means that Big Alcohol is waking up to the fact that pot drinks are complementary, not competitive to what they're doing."

Lisa Campbell, who used to work at an alcohol consignment agency and is now chief executive officer of Mercari Agency, said that pot drinks that focus on low THC doses are not products that heavy consumers are looking for. She noted that the best way to drive interest into the drinks segment is through making them available in places like bars or restaurants, which remains restricted in Canada.

"Unfortunately for the mainstream consumers who have not yet converted into cannabis, it will take more than a low-potency product to walk into a cannabis store," she said in an interview. “Companies focused on converting new consumers have missed the mark to date. Using celebrities as investors is not enough to bring them over."

Anderson, who doesn't have a formal position in the company, but continues to take a senior executive role in its operations, said the company has focused on producing a product that "people actually want to drink" even though it has about two milligrams of THC, compared with the legal limit of 10 milligrams.

"While the consumer is continuing to vote with their dollar on the category and in particular, our success, we stay the course and we believe it's a huge opportunity," he said.

Canadians bought $3.92 billion worth of cannabis in 2021 following a strong December that was fuelled by holiday-related spending. Statistics Canada said Friday that Canadian cannabis sales rose by 8.5 per cent in December from the prior month to $382.4 million, while increasing by just five per cent on a per-day basis. Sales were up by 28.5 per cent compared to the same month a year earlier, the StatsCan data showed. Much of December's sales were driven by double-digit increases from Atlantic and Western Canadian provinces, with Nova Scotia leading the country with a nearly 16 per cent lift in retail activity. Ontario, which continues to account for the lion's share of Canadian cannabis sales, with about 40 per cent of the total market, only reported a five per cent monthly gain. From the December sales figures, Canada's legal recreational pot industry currently operates at an annual run rate of about $4.58 billion. 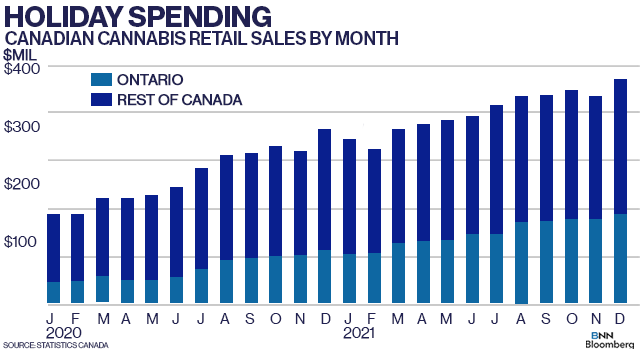 Quebec's provincially-owned cannabis board recorded a third-quarter profit of $26.4 million, an increase of 13.3 per cent from the same period last year, the Canadian Press reports. Sales tallied by the Société québécoise du cannabis (SQDC) grew 10 per cent in the third quarter year-over-year to $190.5 million. Quebec counted 81 provincially-owned cannabis stores at the end of the most recent quarter, up from 56 at this time last year. The province now has a total of 84 licensed cannabis stores, according to ATB Capital Markets. Quebec added $56.3 million in cannabis-related taxes - which includes fees to both levels of government and excise taxes - to its coffers in its most recent quarter, the Canadian Press said.

Cronos Group reported third-quarter results on Friday following a three-month delay that includes a US$236-million impairment mainly related to its U.S. CBD business. Cronos said it made US$20.4 million in revenue, an increase of nearly 80 per cent from the prior year, while posting an adjusted EBITDA loss of US$46.8 million, which missed analyst expectations. The company also said that its U.S. business generated just US$2.1 million in revenue. Cronos said it plans to cut between US$20 million to US$25 million in costs this year, and told analysts on a conference call it plans to eliminate its Cove brand in Canada to focus on its Spinach products. Cronos shares plunged Friday following the release of its quarterly results, while analysts struck a more cautious tone on the company's prospects going forward. "EBITDA losses and cash burn remain significant with no guidance around ongoing cash needs to better evaluate the investment case," said Stifel Analyst Andrew Carter in a note to clients.

Aleafia Health reported its fourth-quarter results on Monday, posting a steep 42 per cent slide in sales to $8.8 million amid an ongoing shift in product sales to the recreational market. The company also booked a $71.5-million loss in the quarter, while also reporting an adjusted EBITDA loss of $2.4 million. Aleafia said in a release it plans to achieve profitability sometime in the second half of this year as it moves to focus on selling more "higher margin, higher potency and innovative adult-use products" rather than its previous product mix of wholesale cannabis. The company has a roughly two per cent share of the Canadian recreational market, giving it a place amongst the top 10 licensed producers, according to Hifyre data. Analysts maintained a neutral position following Aleafia's quarterly results, with Raymond James noting that the past four quarters were "challenging" for the company, but its low cultivation costs should help boost margins over the long term.

ANALYST CALL OF THE WEEK

Canada's cannabis retail sector is going through some growing pains. With nearly 3,000 legal stores operating across the country, many retailers are struggling to make money and consolidation appears to be a looming threat, according to ATB Capital Markets Analyst Frederico Gomes.

Gomes expects bigger retailer chains like Nova Cannabis' Value Buds, High Tide and Fire and Flower to sweep up underperforming retailers over the next 12 to 18 months. He noted in a report to clients earlier this week how store openings are causing retail saturation across provinces, leading to more competition and lower margins and sales per store. "Smaller players - the 'Mom's and Pop's' - have no access to capital and they can't stay in this market for too long," Gomes said in an interview. 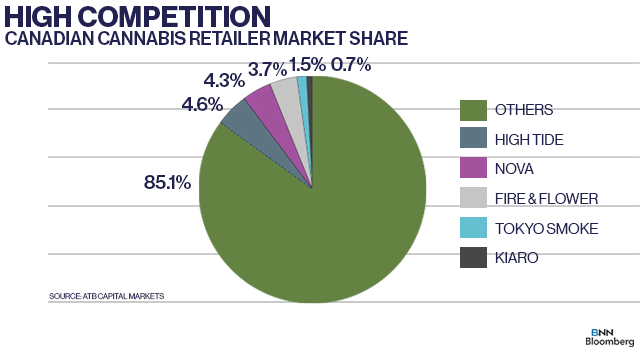 Those sales pressures are expected to trickle down to Ontario, the country's biggest market. Taking cues from Alberta - a saturated market with 744 licensed stores, or roughly 1.67 outlets per 10,000 residents - the average retailer's sales has been hit so hard that if the same density would be applied to Ontario, stores there would see a 20 per cent revenue decline.

That said, Gomes pointed out that no pot shop owner has more than five per cent market share in the country and expects consolidation to help push those numbers closer to low double-digits. "I think it's going to be a march towards 10 per cent market share for these larger players," he said.

-- This week's price is up 0.7 per cent from the prior week, according to the Cannabis Benchmark’s Canada Cannabis Spot Index. This equates to US$1,844 per pound at current exchange rates.

- The amount of cannabis sold in Canada in 2021, according to Statistics Canada.