Canadian consumption of cannabis is on the rise: Study

Nearly three years after cannabis was legalized in Canada, more Canadians consume pot than previously thought, while the overall stigma of the plant continues to fade, according to a new study released by Dalhousie University.

The study, based on a survey of Canadians conducted last month, found that 42 per cent of respondents consider themselves a cannabis consumer, with roughly 12 per cent stating that they have begun to use marijuana after it was legalized in October 2018. That's significantly higher than the 20 per cent of Canadians believed to have used cannabis, according to a recent Statistics Canada report, and up from 36 per cent from a similar Dalhousie study conducted in 2019. 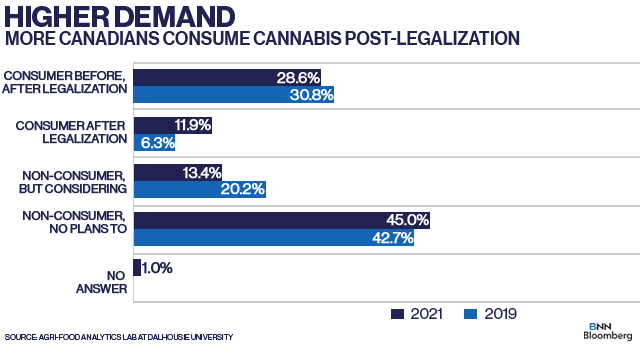 "It's clear that the acceptance and consumption of cannabis is rising and the social stigma is dropping," said Brian Sterling, a research associate in the Agri-Food Analytics Lab at Dalhousie University and president of SCS Consulting, who co-authored the report. Sterling co-wrote the study alongside Sylvain Charlebois, senior director of the Agri-Food Analytics Lab at Dalhousie University. "It's becoming normalized. More people are buying it legally. Most people aren't really terribly concerned about talking openly about it now anymore."

Other findings in the broad-ranging study show that Canadians' attitudes toward cannabis have shifted significantly since legalization and many people are now in favour of legal marijuana as well as products such as edibles and consumption of the drug in public settings like restaurants.

The study found that 78 per cent of Canadians are now strongly in favour of legalization, up from roughly half of the country in a previous survey released in 2019. Nearly 60 per cent of Canadians now procure their cannabis solely from legal sources, nearly double the 38 per cent of people who said they did two years ago. And about 32 per cent of survey respondents state that they consumed more cannabis over the past year than they used to. 14 per cent directly attributed their increased consumption to the COVID-19 pandemic, which has led more people to use a variety of recreational substances as potential coping mechanisms. 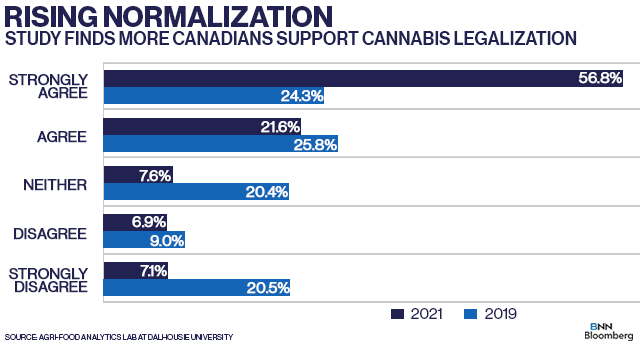 "For me that says that Canadians have accepted the fact that cannabis is legal and now they want to have it convenient to get," said Sterling in a phone interview. "All of this nonsense that we kind of anticipated when legalization took place hasn't happened. So let's move on with our lives and let's normalize it. I think that's the message that we're getting."

Cannabis-infused edible products were also given a spotlight in the study, with one-quarter of survey respondents claiming it is their preferred method of consumption and 14 per cent of Canadians expected to increase their usage of that item. Candies or gummies were the overwhelming preferred option of all edibles, with 35 per cent of consumers picking that product, while just four per cent of respondents picked beverages.

Meanwhile, infusing cannabis into one's home cooking is emerging as a popular option for consumption, although it generally remains a mystery to most Canadians, the study found. More than 18 per cent of respondents said they feel comfortable cooking with cannabis, while just over one-quarter would be willing to order a cannabis-infused dish at a restaurant. Of those restaurant orders, about 21 per cent of respondents would prefer to take out their infused orders, while a similar amount would prefer a specialty cannabis food establishment.

While the laws restrict Canadian restaurants from offering dishes containing cannabis and public consumption is still being mulled by several provinces, Sterling thinks that allowing pot meals to flourish will help generate some extra revenue for some foodservice outlets, which have already been badly hit during the pandemic.

"With cannabis cooking at home, I think that that's still got a long ways to go," Sterling said. "But going out to a restaurant and ordering something that's got cannabis in it is something that I really think could be accelerated. There feels like a pent-up demand for that offering."

The Dalhousie study was conducted over ten days in May 2021, and surveyed 1,047 people across Canada, in both English and French.

Connecticut will become the 18th U.S. state to legalize cannabis after the state's Senate voted in favour of legislation to allow sales of recreational marijuana. The bill now heads to the desk of Connecticut Gov. Ned Lamont to formally become law, which is widely expected. Cannabis industry trade newssite MJBiz reports sales in the state could hit as high as US$750 million after four years of operation. The news comes amid thawing sentiment from southern U.S. states on cannabis legalization, with Marijuana Moment reporting that Texas and Louisiana are expected to sign cannabis reform bills tied to either medical usage or decriminalization efforts. This groundswell of cannabis support comes as policymakers and industry executives await a wide-ranging cannabis reform bill from Senate Majority Leader Chuck Schumer that Curaleaf Executive Chairman Boris Jordan said may be introduced in July. That can't come soon enough for some Canadian cannabis producers including Canopy Growth who are eyeing entry into the U.S. THC market, The Canadian Press reports.

Cannabis retailers in B.C. will finally be able to provide delivery services to customers next month, the provincial government said. CTV News reports B.C.'s Ministry of Public Safety and Solicitor General allowed retailers to deliver cannabis products to customers directly in an effort to move consumers away from the illicit market. Previously, only the provincially-run online retailer was allowed to delivery cannabis products to customers. Meanwhile, Alberta retailers are being consulted by the province to gauge their interest in providing online cannabis sales and in Ontario, retailers are still permitted to provide their own delivery services after the province entered Step 1 in its pandemic-recovery plan.

Cronos Group has finally planted a flag at its first U.S. multi-state operator, announcing it agreed to an option to buy a 10.5 per cent stake in privately-held PharmaCann valued at $110.4 million as soon as cannabis is legalized federally in the U.S. PhamaCann operates in six states with 23 dispensaries and six production facilities, according to a release. Cronos said two of its board members - Executive Chairman Michael Gorenstein and Jason Adler - both held an indirect stake in PharmaCann through their Gotham Green Partners venture, and recused themselves from the deal. A special committee of board members was formed to make a recommendation on the PharamaCann purchase, the company said. Piper Sandler Analyst Michael Lavery said in a report that as the U.S. continues to mull its own legalization framework, Canadian LPs like Cronos need to "look for ways to prepare besides just waiting for the gates to the U.S. to open".

General Motors may drop cannabis testing for its workers following a recent attempt at hiring new staff that fell short of expectations, according to the Detroit Free Press. Two GM union leaders said testing the automaker's workers for cannabis is deterring potential employees from working with the Detroit-based firm, and one company spokesperson said that it is dicussing the matter interally​. One of the drug-testing methods the automaker uses is through hair sampling, which can detect cannabis weeks after consumption. Michigan legalized recreational cannabis in 2018 with sales beginning a year later.

MJardin Group has retained a restructuring firm to advise a special committee of board members to review a potential sale of the Canadian cannabis producer’s assets after a court monitor was appointed to manage the affairs of Bridging Finance, a major lender to the company. The development comes a month after an Ontario court appointed PriceWaterhouseCoopers to manage Bridging Finance following a probe from capital markets regulators that alleged the private lender mismanged its funds and senior executives failed to disclose conflicts of interest. The firm has $155.8 million in outstanding loans with MJardin. MJardin said it retained B.C.-based Restructur Advisors to provide the special committee with general restructuring advice. Canaccord Genuity has resigned as financial advisor to the special committee, the company added.

Hexo reported disappointing third-quarter results Monday that missed analyst expectations after missing some key product deliveries in a couple of Canadian provinces. The Ottawa-based cannabis producer said it generated $22.6 million in revenue in its fiscal third quarter, down 29 per cent from the prior three-month period and up just two per cent from a year earlier. The company also posted a $10.8 million adjusted EBITDA loss, halting momentum from the prior quarter when it posted a gain. Hexo Chief Executive Officer Sebastien St-Louis told BNN Bloomberg the sales miss came largely from challenges getting some of its products to market during the quarter, specifically the potency of some new cannabis strains it was cultivating for the Quebec market. "What happened nine months later, when we actually cultivated outside of our greenhouse, is we did not hit the same quality [for those strains] that had been done in our indoor facility in Bradford, so that was very disappointing," he said.

BMO Capital Markets Analyst Tamy Chen released a report to clients Thursday examining the pathway for Canopy Growth to become profitable. The Smiths Falls, Ont.-based pot giant expects to achieve positive EBITDA by the end of its fiscal 2022 and has earmarked 40 per cent gross margin as a longer-term goal. Chen analyzed Canopy's financials, determining that the company's business-to-business sales generates breakeven to a modest positive gross profit. With that in mind, Chen estimates that over the medium-term, and with a product mix that is skewed to both deeply-discounted and value offerings, Canopy generates a gross margin of mid-20 per cent to low-30 per cent. Chen believes that it will be difficult for Canopy to achieve a gross margin higher than 35 per cent outside of the Premium price segment unless cannabis regulations in Canada change, prices increase meaningfully, or if the company can enter the U.S. cannabis market where limited license states allow for cannabis operators to be own and operate production facilities and retail outlets. Chen maintains a "market perform" and $32 price target on Canopy's stock.

CANNABIS SPOT PRICE: $5.53 per gram -- This week's price is down 0.8 per cent from the prior week, according to the Cannabis Benchmark’s Canada Cannabis Spot Index. This equates to US$2,073 per pound at current exchange rates.

- The amount in grams of unpackaged dried flower either produced or stuck in inventory by Canada's licensed cannabis producers, according to Health Canada data for March 2021​.