Shares of major Canadian-listed cannabis companies extended their broad declines Monday as investors pull out of the volatile sector just a few days after recreational use was legalized in Canada.

Legalization has not been kind to some of the country’s biggest names such as Canopy Growth Corp., Aurora Cannabis Inc. and Tilray Inc. which have seen their respective stocks suffer double-digit declines since Oct. 17 when adult-use of marijuana in Canada was permitted as Bill C-45 came into force.

Canopy Growth (WEED.TO), the country’s largest marijuana producer, sank 11.2 per cent on Monday and has tumbled 26.2 per cent over a five-session losing streak that dates back to the day before recreational cannabis was legalized in Canada.

Meanwhile, Aurora Cannabis (ACB.TO), fell 12.2 per cent on Monday ahead of its debut on the New York Stock Exchange on Tuesday.

Other key decliners in the marijuana space include Leamington, Ont.-based Aphria Inc. (APH.TO), which has fallen more than 20 per cent since the close of trading on Oct. 15, while Tilray (TLRY.O) shed almost 20 per cent of its value over the last two trading sessions alone. Smaller producers have also taken a tumble with Cronos Group (CRON.O) and CannTrust Holdings Inc. (TRST.TO) both down almost 30 per cent since last Tuesday. 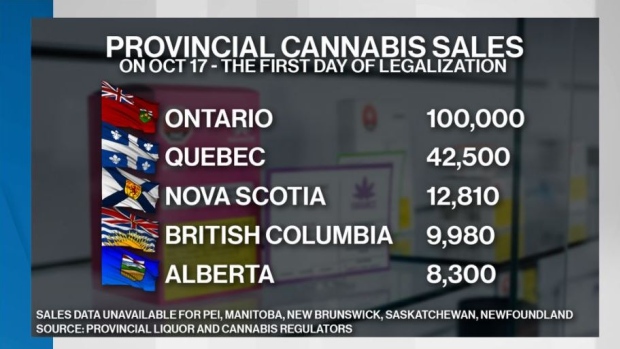 Cannabis sales in Canada have been mired in shortages as provincial and private-sector retailers struggle to keep up with the strong demand for recreational pot across the country.

Five provinces, including Ontario and Quebec, counted about 172,000 orders placed on the first day of sales, leading some government agencies and private retailers to issue product shortage warnings. Manitoba warned consumers that supply shortages could last as least six months, while Quebec highlighted that cannabis oils, capsules and pre-rolls would be in short supply.

A milestone for the sector will come Tuesday when Aurora Cannabis starts trading on the New York Stock Exchange, allowing more visibility for the company’s shares in the U.S. Rival producer Aphria has also applied to list on the NYSE, although it has not announced when its shares will start trading south of the border.

While some investors may be taking the opportunity to employ the “buy the rumour, sell the news” strategy, Canadian cannabis producers have been underperforming their U.S. publicly-traded peers over the past week and month, according to a report Echelon Wealth Partners issued to clients last Friday. American producers such as MedMen Enterprises Inc. and MPX Bioceutical Corp. were significant gainers over the past week amid M&A activity within the U.S. space as well as the announcement of a bought deal financing by Green Thumb Industries Inc.