There are big dividends to being transparent, says cannabis exec Linton

Canopy Growth Corp’s game-changing deal with the maker of Corona beer has more than doubled the pot producer’s stock price, but its chief executive officer says the global medical market is the real justification for its sky-high valuation.

“If we figure out in Canada how to help people who want to sleep or how to help old people feel better and move around, if we become the first company that does $1 billion in revenue in the cannabis space, I don’t really think the valuation has run away from itself,” Bruce Linton, 52, said in an interview at Bloomberg’s Toronto office.

Canopy’s health subsidiary has received approval to conduct Phase 2 clinical trials to evaluate the use of medical cannabis in the treatment of insomnia, and its animal health division is researching the effectiveness of cannabidiol, chemical compounds in pot known as CBD, to treat anxiety in animals. Canopy has filed 39 patent applications for both human and animal treatments, and Linton estimates Canopy’s share of the canine market alone could be worth about $9 billion in annual sales.

Medical marijuana has been legal in Canada since 2001, creating a large population of people who’ve been using it to treat various ailments under medical advice for years, potentially giving Canadian companies that are doing clinical trials a trove of data, Linton said. 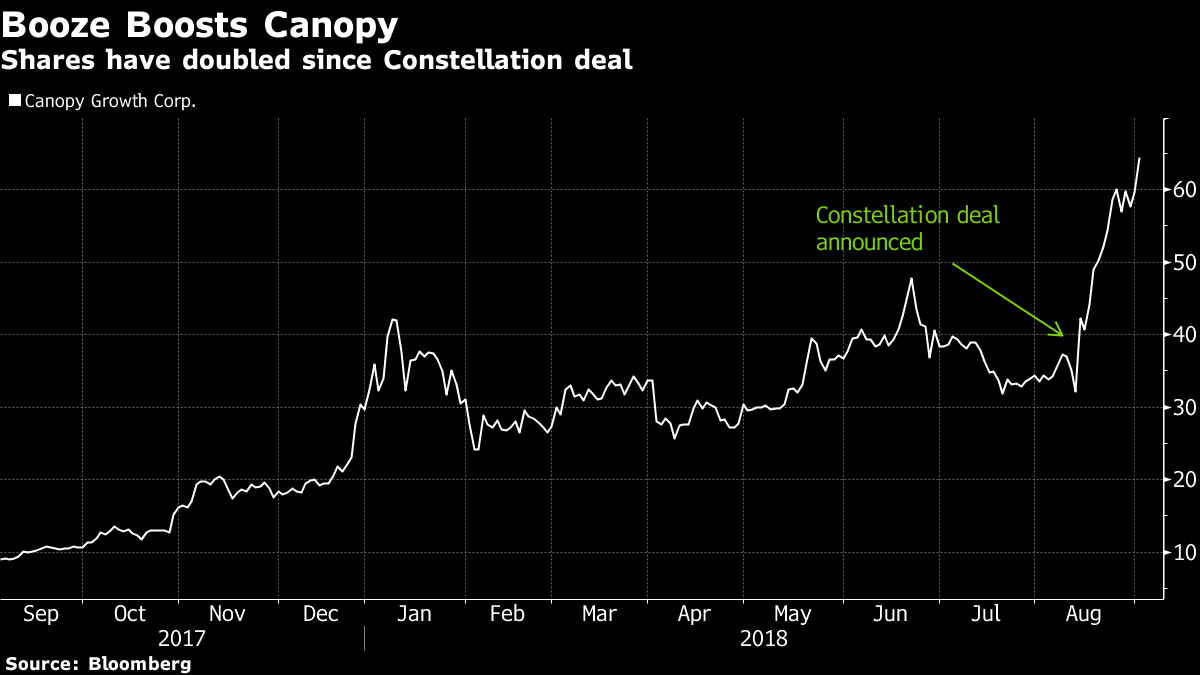 Unlike alcohol companies, however, Linton believes the pharmaceutical industry will wait for more evidence before making material investments in cannabis, likely in two to three years.

Canopy, already the biggest company in the pot space, leapt ahead of its competitors earlier this month when it announced that Constellation Brands Inc. would invest $5 million, increasing its stake to 38 per cent and raising the possibility of marijuana-infused beverages. Constellation will also receive enough warrants to become a majority shareholder in the next three years if it chooses to exercise them.

The deal will give Canopy 12 times more cash than any of its competitors, according to Matt Bottomley, analyst at Canaccord Genuity Group Inc. It also holds out the potential for marijuana-infused alcohol products. The company, which reported sales of C$25.9 million in its latest fiscal quarter, closed Tuesday with a market value of more C$15 billion, about the same as Barrick Gold Corp.

Linton has some advice for liquor companies that may be thinking of following in Constellation’s footsteps: don’t bite off more than you can chew.

“If anybody goes and says, ‘We’re just going to buy the whole thing,’ I predict that to be the first mega-disaster in the cannabis space,” he said.

The culture of a big, established alcohol player may clash with a new cannabis company as it “throws a bunch of cash at it” and puts pressure on its staff to achieve financial targets, he predicted. “I think the burden of the capital will cause an implosion which will be quite substantial.”

Linton said he had conversations with other alcohol players before Constellation made its first investment in Canopy last October, but “their answer was uniformly, ‘We’re not doing this.”’

Besides its investment in Canopy, Constellation has no presence in Canada. Its Canadian wine business was acquired by Ontario Teachers’ Pension Plan for about C$1 billion in 2016, and Corona is distributed by Anheuser-Busch InBev SA in Canada. That makes a Canadian investment more attractive than it would be for an alcohol maker that does significant business in the country and therefore risks cannibalizing its own sales, Linton said. Legal pot has been shown to reduce alcohol consumption.

“The less you have in Canada to lose, the more aggressively you can use it as a petri dish,” he said.