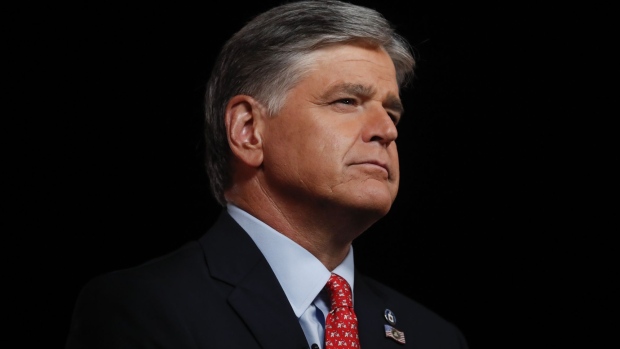 Sean Hannity, host at Fox News, broadcasts from the Republican National Convention at Fort McHenry National Monument and Historic Shrine in Baltimore, Maryland, U.S., on Wednesday, Aug. 26, 2020. Vice President Pence will make the case for a second term for himself and President Trump today capping a night at the Republican National Convention designed to emphasize the military, law enforcement and public displays of patriotism. , Bloomberg

(Bloomberg) -- The House panel investigating the Jan. 6 insurrection at the U.S. Capitol has asked Fox News host Sean Hannity to answer questions about his communications with former President Donald Trump and his then-White House Chief of Staff Mark Meadows.

The panel’s leaders, Democratic Representative Bennie Thompson and Republican Representative Liz Cheney, said in a Tuesday letter that the committee knows Hannity is “in possession” of dozens of text messages with Meadows and others related to the 2020 election and Trump’s efforts to contest the outcome.

Included in those communications are apparent disagreements over efforts to overturn the election results.

“I do NOT see January 6 happening the way he is being told,” Hannity said of Trump’s efforts in a Dec. 31, 2020, text to Meadows, which has been obtained by the panel.

Tessica Glancey, a Fox News spokesperson, referred to a statement provided earlier to Axios from Hannity’s lawyer Jay Sekulow that “any such request would raise serious constitutional issues including First Amendment concerns regarding freedom of the press.”

Glancey also pointed to a transcript of Hannity condemning the attack on the night of Jan. 6.

Read the committee’s letter to Hannity

“The Select Committee has immense respect for the First Amendment to our Constitution, freedom of the press, and the rights of Americans to express their political opinions freely,” Thompson and Cheney write in their letter to Hannity. “For that reason, we do not intend to seek information from you regarding your broadcasts on radio or television, your public reporting or commentary, or your political views regarding any candidate for office.”

But Thompson and Cheney also write that the committee’s seven Democrats and two Republicans “have a solemn responsibility to investigate fully the facts and circumstances of these events in order to inform our legislative recommendations.”

“Thus, we write today to seek your voluntary cooperation on a specific and narrow range of factual questions,” they said.

One text, Thompson wrote, suggests Hannity had knowledge of concerns by the White House Counsel’s Office regarding the legality of Trump’s plans for Jan. 6.

“These facts are directly relevant to our inquiry,” Thompson and Cheney wrote.

They point to another communication the night before the riot.

“You wrote: ‘Im very worried about the next 48 hours,’” the letter states. The committee did not specify to whom Hannity sent that text message.

“With the counting of the electoral votes scheduled for January 6th at 1 p.m., why were you concerned about the next 48 hours?” Thompson and Cheney asked.

During a public hearing last month, the committee disclosed that Hannity had texted Meadows during the riot asking that he convince Trump to stop the insurrection.