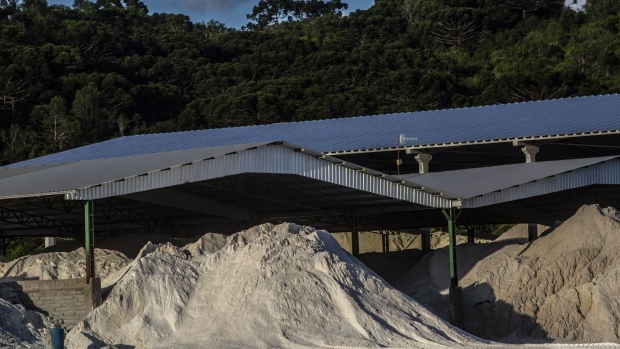 Piles of limestone at a warehouse on highway BR 285 near Lagoa Vermelha, Rio Grande do Sul state, Brazil, on Tuesday, Feb. 11, 2020. The Brazilian National Congress approved the 2021 annual budget bill, which includes a measure to increase monthly minimum wages to 1,088 Brazilian reals from 1,045 reals. , Bloomberg

(Bloomberg) -- A California-based startup has found a way to use limestone — a cheap and widely available material — to remove carbon dioxide directly from the air, potentially overcoming a major hurdle in scaling up the technology needed to avoid catastrophic global warming.

As a growing number of companies have set goals to reach net-zero emissions in the coming decades, demand has surged for ways to offset their ongoing pollution. However, experts warn that cheap credits based on avoiding deforestation or building renewable energy projects tend to exaggerate their climate benefits. Technologies that actually remove carbon from the atmosphere can more credibly back the promise of capturing and storing a set amount of greenhouse gas.

But those technologies are still nascent and often require complex machinery, making them tens of times more expensive than carbon credits from projects that plant trees of build wind farms, which can cost as little as $3 per ton.

One reason for the high cost is that direct-air capture technology has so far relied on the use of expensive solvents that can separate CO₂ from the air, like iron filings to a magnet. Once the gas is bound to the solvent, it needs to be heated to a high temperature to release the CO₂, which can be captured, compressed and buried deep underground in rock formations similar to those that hold oil and natural gas.

Heirloom uses a similar process, without the expensive solvents. The company starts by heating limestone, also known as calcium carbonate, to more than 600°C in an electric furnace that’s powered by renewable electricity. The most energy-intensive and expensive step. The process releases CO₂ — which is captured — and the leftover calcium oxide is spread out in hundreds of trays that are stacked 20-feet high and exposed to the air.

“It looks like cookies in a baking tray,” said Heirloom Chief Executive Officer Shashank Samala. “We’re trying to simplify as much as possible.”

Over months or years, calcium oxide gets converted back to limestone as it absorbs CO₂ from the air. But Heirloom says that by turning the material into a fine power and carefully placing the trays to maintain the right conditions, it can shrink the process down to a week. Once calcium carbonate is created, the cycle is repeated 15 times or so before the material isn’t able to effectively capture CO₂.

Samala declined to provide more details on the company’s approach because some of the tweaks it has made to accelerate the capture process are quite simple and yet to be patented. The engineering work “could be easily replicated by others, even with a couple of clues,” said Julio Friedmann, chief scientist at Carbon Direct Capital Management LLC, another fund that contributed to Heirloom’s latest investment round.

Heirloom has so far only tested the different steps in its process individually. The new money will be used to build a pilot plant by next year that will put them all together and attempt to capture a few tons of CO₂ every day. Unlike some other direct-air capture startups, Heirloom does not need to overcome basic science challenges, such as whether the capture process can actually work quickly, said Friedmann. The technology is based on peer-reviewed research published in 2020.

The most advanced direct-air capture companies include Switzerland-based Climeworks AG, which has sold credits to Gates for as much as $600 a ton, and Canada-based Carbon Engineering Ltd., which has been working for a few years with Occidental Petroleum Corp. to build a plant that could capture as much as 1 million tons each year.

Even though Heirloom has yet to build a facility of that size, technology companies Stripe Inc., Shopify Inc., Klarna Bank AB, and Wise Plc have already paid for CO₂ it may capture in the future. Stripe said that it paid more than $2,000 a ton with the understanding that the cost will come down rapidly as the technology is scaled up. Heirloom aims to eventually lower the cost of its captured carbon to as little as $50 a ton.