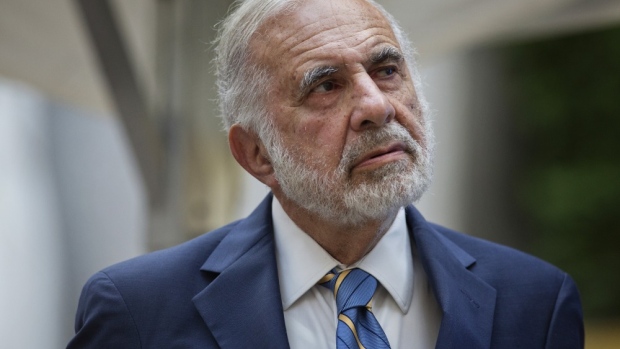 Billionaire activist investor Carl Icahn attends the Leveraged Finance Fights Melanoma charity event in New York, U.S., on Tuesday, May 19, 2015. Lyft Inc. is worth more than its recent $2 billion valuation, based on the $50 billion value of larger car-hailing rival Uber Technologies Inc., Icahn said, after he led a fundraising round at Lyft last week. , Photographer: Bloomberg/Bloomberg

Activist investor Carl Icahn launched a lawsuit against Occidental Petroleum Corp. with the goal of potentially seeking board seats and a sale of the company.

The billionaire investor said in the suit filed Thursday in Delaware Chancery Court that he’s built a US$1.6 billion stake in Occidental and is upset by the company’s decision to acquire Anadarko Petroleum Corp. for US$38 billion. Singled out for special criticism was the US$10 billion in financing lined up from Warren Buffett’s Berkshire Hathaway Inc. and the lack of a shareholder vote.

"The Anadarko deal is very much a bet-the-company deal from the point of view of the common stockholders," Icahn said in the suit. " Not consulting them on the deal was disenfranchising at a minimum."

Icahn, 83, accused the company of structuring the Anadarko deal without a shareholder vote so that "it’s a close, and unfortunate, certainty" the transaction will be finalized later this year. He urged Occidental to complete the acquisition as inexpensively as possible, then immediately launch a strategic review, including a potential sale of the combined company.

"It certainly should be explored by the board, as should all other feasible strategic options," Icahn said.

Occidental said in a statement it would respond to Icahn’s suit “in due course,” and said it planned to close the Anadarko transaction in the coming months.

“Our acquisition of Anadarko will create a global energy leader with a highly complementary asset portfolio and a unique opportunity to deliver compelling value and returns to the shareholders of both companies,” Occidental said.

Icahn’s stake is roughly 4 per cent of the company’s outstanding shares, according to Bloomberg calculations. He would therefore require substantial support from other holders to call a meeting. Several institutional investors do have mandates to support a call for a special meeting even if they don’t support the proposals that would be presented.

Occidental shares have fallen about 15 per cent year to date. The shares were down 0.3 per cent to US$51.86 as of 3:41 p.m. in New York, after initially rising as much as 2.3 per cent when the suit was reported. Anadarko fell as much as 2.5 per cent before paring those losses.

Representatives for Anadarko and Buffett didn’t immediately respond to requests for comment.

The suit questions Occidental Chief Executive Officer Vicki Hollub, who fended off a competing takeover offer for Anadarko from Chevron Corp., as well as her deal with Buffett. “A ninety-minute deal ‘negotiation’ with one of history’s canniest investors, is no place to gain M&A experience -- at least if you care about protecting your stockholders," the suit said.

Occidental should also consider other options, Icahn said, including potentially paying down debt more aggressively and creating a pure-play driller focused on the best basin.

"Both Chevron and the company appear to have prized Anadarko because of its strong position in the Permian Basin," the suit said. "Occidental has an even stronger Permian position and there is little doubt that it could have attracted strong and competitive bids at a premium to its stock price."

The suit also criticizes the US$8.8 billion agreement to sell Anadarko’s African assets to Total SA. “From all appearances it seems that Occidental sold these assets in a quickly arranged fire sale before it even owned them.”

If oil prices fall below US$45, the suit says there’s “substantial risk” that Occidental will have to cut its dividend. Icahn sent a letter to Occidental on May 21 seeking records related to the deal. On May 28, Occidental responded that it was considering the demand.

Icahn said in the filing he believes Occidental’s board and management "are in far over their heads, have made numerous blunders in recent months and might continue to trip over their feet if the board is not strengthened."