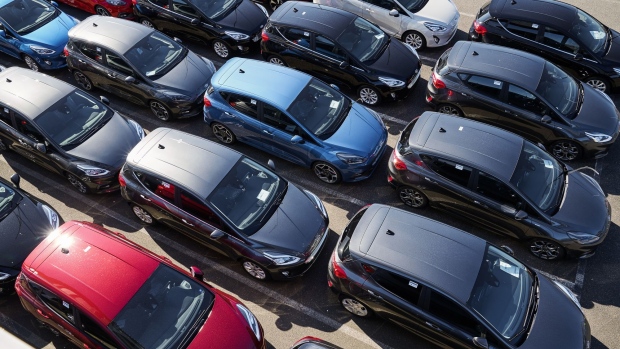 New automobiles manufactured by Ford Motor Co. sit in a storage area as coronavirus halts the automaker's German automobile assembly operations, at the Port of Cologne in Cologne, Germany, on Tuesday, March 24, 2020. Ford was downgraded by Fitch Ratings as the coronavirus pandemic sends shock waves through supply chains and all but wipes out demand across the auto industry. , Bloomberg

The automotive industry has borrowed US$132 billion since March as the spread of the coronavirus curbed demand for cars and closed factories. The sector is the largest user of funds put in place to ease the impact of the pandemic.

The amount consists of US$79 billion in new loans and US$53 billion in drawdowns from existing credit lines. Facilities linked to the pandemic account for almost 80 per cent of overall loan borrowings by the sector in the year to date.

Loans for virus relief, which peaked during the March-to-June period, eased this month to less than US$100 million as some companies began paying down their loans.

Ford Motor Co. is the latest company to repay part of revolving facility drawn previously, according to an Bloomberg News report earlier this week. The automaker said Thursday its second-quarter operating loss was less than half the US$5 billion deficit it had predicted, due mainly to undiminshed demand for its sport utility vehicles and trucks.

French car-parts maker Faurecia SE sold a bond this week to repay its 800 million-euro (US$949 million) club loan from April. Fiat Chrysler Automobiles N.V. also paid down drawdown portions of its 3.5 billion-euro revolver with a bond early this month.

Meanwhile, at least 20 companies have requested to waive or loosen covenants binding their loan agreements for more financial headroom during the pandemic. Most requests have come from junk-rated firms such as LKQ Corp., Garrett Motion Inc. and Samvardhana Motherson Automotive Systems Group B.V.