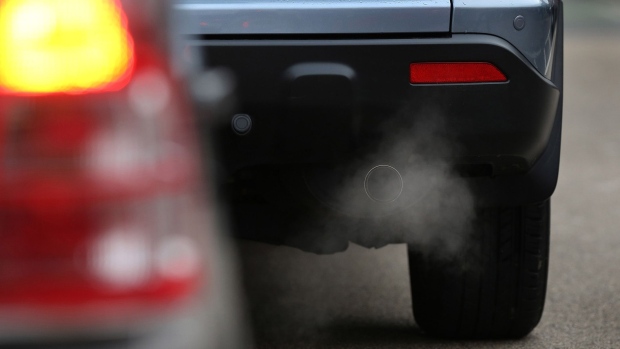 (Bloomberg) -- Automakers balked at the European Union’s plan to set stricter emissions limits for the next decade, saying they lack the government support needed to achieve the targets.

The industry is among the sectors most under fire in the 2030 Climate Target Plan, which calls for the bloc to reduce carbon-dioxide emissions by 55% from 1990 levels rather than the previously planned 40%. To achieve this, the European Commission sees carmakers needing to gradually phase out combustion engines and roughly halve CO2 emissions from 2021 targets.

A dense, EU-wide network of charging stations must be built and governments will have to offer bigger incentives to make zero-emission vehicles affordable, the European Automobile Manufacturers Association said. Germany’s car lobbying group warned the targets would be a burden on already-struggling suppliers and hurt employment and economic growth.

The European Commission’s policy paper, which Bloomberg News reported on in draft form earlier this week, was made public as Europe’s automakers released disappointing monthly sales results that dashed hopes the industry was starting to recover from the pandemic. Registrations are on track for at least a 20% drop this year.

“Policy makers need to put in place not only targets but also the required supportive policies for all vehicle types, without which these targets will simply not be achievable,” Eric-Mark Huitema, the head of the ACEA, said in a statement.

The world’s top auto manufacturers have been lapped by Tesla Inc. from a market-value perspective as the electric-car maker led by Elon Musk has built its own charging network to support its growth. While the Model 3 maker is a small player in Europe, it’s aiming to start production at a plant under construction near Berlin next year.

BMW AG is open to dialogue with the EU commission and member states, though it said this is short notice for further tightening of 2030 targets. The existing plan to reduce CO2 car-fleet emissions by 37.5% over the next decade was adopted after a multi-year process in 2019.

The rise of electric vehicles will hinder demand for the many components needed for internal-combustion engines and take less labor to build, stoking dread among auto workers around the globe. Germany’s VDA was warning before the coronavirus pandemic that the technology shift could lead to the loss of 70,000 jobs over the next decade. Supplier Continental AG announced plans earlier this month to dismiss or transfer as many as 30,000 workers.

The emissions-cutting plan puts Europe’s ability to compete on the global stage at risk, Hildegard Mueller, the head of the VDA, said in a statement.

“Given the backdrop of the coronavirus, it’ll lead to serious financial burdens and endanger Europe’s competitiveness,” he said.

Chancellor Angela Merkel’s ruling coalition is divided over the need for more state aid for the auto industry, with some favoring support for combustion cars and others seeking incentives for EVs. Germany already introduced purchase subsidies of as much as 9,000 euros ($10,600) per electric vehicle to stimulate demand after virus-related lockdowns were lifted.

As the companies look to put those issues behind them, they’re pressing policy makers to help put zero-emission vehicles on equal footing with those that run on combustion engines.

“The customer who drives CO2-free must not be punished,” Martin Daum, the chief executive officer of Daimler’s truck unit, said this week at the unveiling of a concept big rig that runs on hydrogen. “The fuel cell didn’t prevail 10 years ago because it was uneconomical for the customers. That will be the same in 10 years’ time if the framework doesn’t change.”