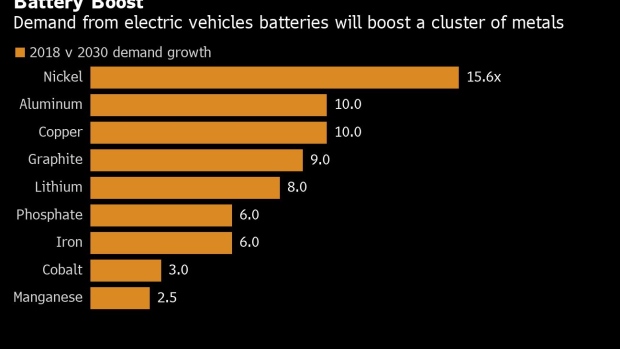 A graphic symbol for an electric vehicle car charging bay is displayed at the Tritium Pty plant in Brisbane, Australia, on Wednesday, March 6, 2019. The viability of electric vehicles depends in part on a manufacturing plant in eastern Australia, where gleaming white cabinets the size of large refrigerators are loaded onto shipping crates. They’re among the most advanced car chargers available, promising to deliver a full tank of juice in minutes. Photographer: Ian Waldie/Bloomberg , Bloomberg

(Bloomberg) -- Mine developers scrambling to fund projects to meet forecast demand for battery metals see the threat of looming supply crunches as a trigger for electric-vehicle makers to step in with investments.

An already tough environment to raise project finance for the mines is being made worse by the impact of the coronavirus pandemic and plunging global auto sales. It’s a scenario that’s threatening to slow a pipeline of operations planned to supply lithium, nickel and cobalt materials.

With “mind-blowing” projections from the auto industry on its future raw material needs, the best solution could be for vehicle producers to invest directly in mining operations, according to Sam Riggall, chief executive officer of developer Clean TeQ Holdings Ltd.

“Having to invest upstream is not what a car company wants to do, we understand that, but the rules have changed,” Riggall said. “We’re building a supply chain that’s never existed before, for a range of metals that have never been needed before by this industry.”

Auto companies have outlined plans to spend more than $140 billion on electric vehicle production, an industry shift that’ll need producers of specialist materials and metals for batteries to dramatically lift output. Nickel demand is forecast to surge about 16-fold through 2030 from 2018, while there will also be a significant rise in demand for graphite, lithium, copper and aluminum, according to BloombergNEF.

Lithium producers alone will need an estimated $25 billion to $30 billion in financing over the next decade to meet demand, BNEF said in a February report.

Automakers are seeking more involvement in the riskier parts of their supply chains, Scott Tozier, chief finance officer of Albemarle Corp., the top lithium producer, said in an interview.

In talks, vehicle producers want better understanding on “how do I make sure I get the product I need, when I need it,” he said. “Will they go all the way to invest, we’ll have to wait and see -- it’s too early to call.”

For battery producers and automakers, with no existing expertise in mining, investments would only make sense for strategic reasons, such as geopolitical security, said Sophie Lu, BNEF’s head of mining and metals. Many large mining companies remain hesitant to enter into niche markets, or already have options to bring on capacity inside their own portfolios.

It means smaller developers of battery metals projects “are swimming in a very shallow pool of retail capital and are starving for start-up capital,” she said.

Nickel sulfate, among materials that Clean TeQ’s Sunrise mine project aims to produce, is a key industry concern. Even a doubling of production capacity through 2030 won’t be enough to keep pace with demand, and the market could fall into deficit as soon as 2023, BNEF analysts forecast. Lithium hydroxide could also fall into deficit by 2023 amid a squeeze in refining capacity, according to the analysts.

“I scratch my head and wonder where is all this metal going to come from,” Clean TeQ’s Riggall said. “The risks to the automotive sector are very, very large unless they secure their raw materials supply chain.”

Clean TeQ is continuing a search for a partner begun last June for the Sunrise nickel-cobalt-scandium development in Australia. The project has an estimated cost of about $1.5 billion, according to a June 2019 filing.

While major car producers do understand funding challenges faced by metals producers, most are wary of exposure to mining projects that come with unfamiliar risks and can take years to move from exploration to production, according to Vivas Kumar, a principal consultant at industry adviser Benchmark Mineral Intelligence and previously a member of Tesla Inc.’s battery supply chain team.

What’s more likely is that the auto sector will move to add more offtake contracts, agreements to buy future production, that can help developers unlock traditional sources of project finance, he said.

“They provide validation of your project, that there is a blue-chip end customer to generate cash flow,” according to Kumar. Automakers are increasingly “recognizing that this is something that they could do that could actually help the junior miners get financing,” he said.