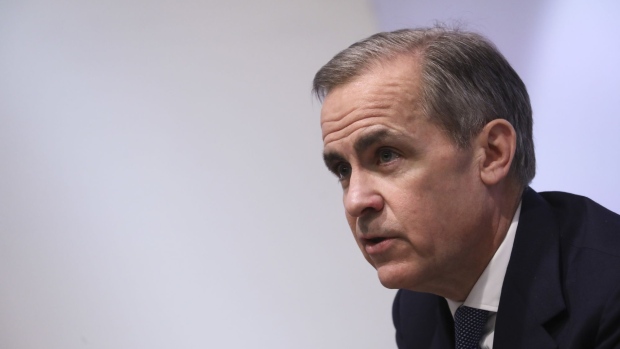 Mark Carney, governor of the Bank of England (BOE), speaks at the bank's Monetary Policy Report news conference in the City of London, U.K., on Thursday, Jan. 30, 2020. The BOE kept interest rates on hold in Carney's final meeting, waiting for more evidence of economic rebound before supporting it with a cut. , Bloomberg

Former Bank of England Governor Mark Carney accused Liz Truss’s government of “undercutting” the nation’s economic institutions, and said that her fiscal plans were to blame for the drop in the pound and bonds.

His comments are the latest in a string of international criticism and warnings about the government’s fiscal plans, including from the International Monetary Fund and ratings firm Moody’s.

“The message of financial markets is that there is a limit to unfunded spending and unfunded tax cuts in this environment,” Carney told BBC Radio. “And the price of those is much higher borrowing costs for the government and for mortgage holders and borrowers up and down the country.”

Carney also said the government’s “mini-budget” of sweeping tax cuts was working at “cross purposes” with the BOE’s attempt to bring inflation under control, adding there would be a lag before the growth-boosting policies bear fruit. The fiscal plan sparked chaos in financial markets, ultimately forcing the central bank to step in on Wednesday to prevent a crash in bonds from derailing the nation’s pension funds.

Former BOE official Adam Posen told Bloomberg’s In The City podcast this week that it was “really sad to see” the government behaving in an “irresponsible” manner.

The early days of the Truss Government have also seen the firing of the Treasury’s top civil servant, criticism of the BOE over inflation and the apparent sidelining of government’s fiscal watchdog, the Office for Budget Responsibility. Carney was no stranger to political criticism himself during his tenure in the UK, mainly as result of his comments on Brexit.

“There was an undercutting of some of the institutions the underpin the overall approach -- so not having an OBR forecast is much-commented upon,” Carney said.

“Unfortunately having a partial budget, in these circumstances -- tough global economy, tough financial market position, working at cross-purposes with the bank -- has led to quite dramatic moves in financial markets.”

The comments echo those made by current BOE chief economist Huw Pill earlier this week.

“It is crucial that the underlying macro policy institutional framework remain credible,” Pill said on Tuesday. “It is important that all actors in that are both respected in terms of what their responsibility is and their objective and intentions are.”