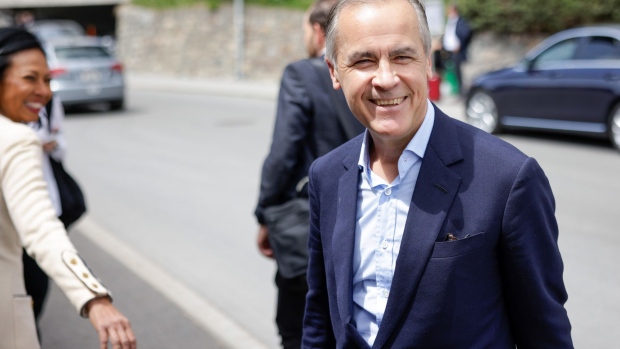 Mark Carney at the World Economic Forum in Davos, Switzerland this week. , Bloomberg

Carney’s new role with Canada 2020 will see him “focused on ambitious progressive public policy solutions as Canada looks ahead from the pandemic,” the Ottawa-based think tank said Thursday in a news release.

The organization and the Liberals have close ties, with staff frequently moving between the two organizations. The think tank was co-founded by Tom Pitfield, a childhood friend of Trudeau’s. Its leadership includes Anna Gainey, who served as Liberal Party president from 2014 to 2018, and Braeden Caley, the party’s lead spokesperson until this year.

Carney, who was previously governor of both the Bank of Canada and the Bank of England, was a keynote speaker at the Liberal policy convention last April. That appearance was seen as the surest sign yet he was planning to jump into politics, and his name frequently comes up as a potential successor to Trudeau.

But instead of running as a candidate in last year’s election, Carney chose to stay out of the fray, saying his commitments to climate change action -- including a role with the United Nations -- would keep him too busy.

Carney also has a family connection to Canada 2020. His wife Diana was vice president for research at the organization before they moved to the UK.

Trudeau won the September 2021 election, but fell short of a majority in parliament. Earlier this year, the Liberals entered into a power-sharing deal with the left-leaning New Democratic Party, meaning Canadians likely won’t go to the polls again until 2025. Trudeau has so far said he intends to run in the next election.