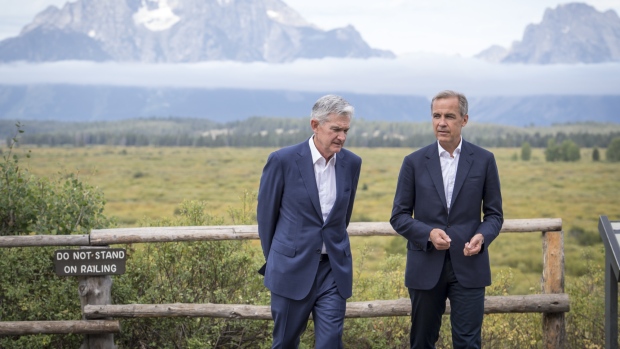 Jerome Powell, chairman of the U.S. Federal Reserve, left, and Mark Carney, governor of the Bank of England, walk the grounds during the Jackson Hole economic symposium, sponsored by the Federal Reserve Bank of Kansas City, in Moran, Wyoming, Aug. 23, 2019. Bloomberg/David Paul Morris

Mark Carney laid out a radical proposal for an overhaul of the global financial system that would eventually replace the U.S. dollar as a reserve currency with a Libra-like virtual one.

Just a few months before he steps down as Bank of England governor, Carney offered his vision for the international economy at a time of sweeping change. Trade wars and the threat of currency wars are hurting growth and upending multilateral cooperation, while central banks are trapped in a low interest-rate world as they struggle to revive inflation.

“The combination of heightened economic policy uncertainty, outright protectionism and concerns that further, negative shocks could not be adequately offset because of limited policy space is exacerbating the disinflationary bias in the global economy,” Carney said. “What then must be done?”

Speaking to fellow policy makers and academics at the U.S. Federal Reserve’s annual symposium in Jackson Hole, Wyoming, he said that in the short term central bankers must deal with the situation as it is. But he also warned that “blithe acceptance of the status quo is misguided,” and dramatic steps will ultimately be needed.

His most striking point was that the dollar’s position as the world’s reserve currency must end, and that some form of digital currency — similar to Facebook Inc’s proposed Libra — would be a better option. That would be preferable to allowing the dollar’s reserve status to be replaced by another national currency such as China’s renminbi.

He spoke hours after U.S. President Donald Trump roiled financial markets by again using Twitter to criticize Fed policy and tweeting that he would respond to retaliatory tariffs on American goods imposed by China.

“In the longer term, we need to change the game,” Carney said. “When change comes, it shouldn’t be to swap one currency hegemon for another.”

Libra is planned to be a worldwide digital currency that could lie outside the direct control of central banks. So far it has drawn opprobrium from most policy makers — French Finance Minister Bruno Le Maire said it is “out of the question” and U.S. House Financial Services Committee Chair Maxine Waters promised an aggressive response from Congress.

Carney has been more sympathetic, though in his speech he said it may be that a new “Synthetic Hegemonic Currency” would be best provided by the public sector, through a network of central bank digital currencies.

“Even if the initial variants of the idea prove wanting, the concept is intriguing,” he said. “An SHC could dampen the domineering influence of the U.S. dollar on global trade.”

Carney’s chief concern is that globalization has heightened spillovers, and financial integration means crises can spread rapidly. That results in U.S. monetary policy having a greater impact on other nations than it used to.

A multipolar system would reduce those spillovers and help minimize the volatility of capital flows to emerging markets. The “mainstream view” of monetary policy and the international financial system is “increasingly anachronistic,” the BOE chief declared.

“Even a passing acquaintance with monetary history suggests that this center won’t hold,” he said. “Let’s end the malign neglect of the international monetary and financial system and build a system worthy of the diverse, multipolar global economy that is emerging.”