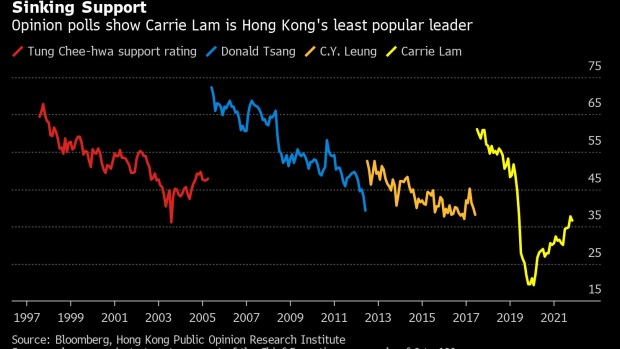 (Bloomberg) -- Two years ago, Carrie Lam’s approval rating plummeted to around 15%, making her the least popular chief executive in Hong Kong’s post-colonial history. While it has roughly doubled since then, still only about one in three residents support her.

Fortunately for Lam, public opinion hardly matters when it comes to next year’s battle to lead Hong Kong. She’s now considered the front-runner to win another five-year term, with local media calling her the “comeback queen.”

The race all comes down to which candidate can secure the backing of the 1,500 Communist Party loyalists who are allowed to vote for the city’s leader on March 27, representing some .02% of Hong Kong’s population. That’s particularly the case after China overhauled the Election Committee this year to cement its control.

Lam, 64, has credited Beijing with supporting her through 2019 pro-democracy protests that saw hundreds of thousands of people hit the streets to demand her resignation along with meaningful elections -- proposals rejected by President Xi Jinping’s government.

“Sometimes you thought that was the end of the world,” the career bureaucrat told the South China Morning Post last week, recalling that period. “And suddenly, it’s not. It was the beginning of a bright future.”

Over the past two years, Lam has shown herself to be a loyal servant.

She implemented a China-imposed national security law that prompted the U.S. to put sanctions on her for undermining democracy. She’s prioritized cross-border links over opening to the other countries, imposing some of the world’s strictest quarantine policies. And in October she unveiled a long-term housing project for the world’s most expensive residential market -- a problem China’s top official overseeing the city, Xia Baolong, in July said any future leader must tackle.

While no candidate has officially entered the chief executive contest, big names have started to align their policies with Beijing’s criteria. Voting for the city’s legislature on Dec. 19 kicks off election season, and could help shape the race as any candidate for the top job must resign from that body.

Here are the people to watch:

Financial Secretary Paul Chan, 66, has signaled that he’s ready to put his hat in. A week before Lam’s annual policy address, he released his own manifesto, the Business Environment report, which outlined how the city could better leverage integration with the mainland.

Chan, who grew up in a squatter settlement and then public housing, was ushered into government by Lam’s predecessor, Leung Chun-ying, and is thought to be liked by Beijing. But it’s unclear if his lack of a national security background -- now a key priority for the city -- might rule him out.

Career cop John Lee, 63, proved he had Beijing’s backing when he was named Hong Kong’s No. 2 top official in a June cabinet reshuffle. A staunch supporter of the extradition bill that sparked the 2019 unrest and defender of the police, Lee has been instrumental in enforcing the security law and led the shutdown of Lai’s Apple Daily newspaper.

In the past, the chief secretary post has been a springboard to higher office, with two of the city’s four leaders holding that position. Choosing Lee would be the clearest sign yet Beijing is seeking to shepherd the city in the direction of a quasi-police state, said one Western diplomat based in Hong Kong.

Leung, 67, flirted with the idea of resuming the top job in March, saying he’d “do anything to serve Hong Kong well and to serve the country.” He’s been at times critical of Lam’s government on his verified Facebook page, in August questioning why a fund that paid for protesters’ legal fees was allowed to exist.

The former businessman stepped down after his first term, which was defined by the 2014 Umbrella Movement that shut down the city’s central thoroughfare for months -- a precursor to the 2019 protest movement. It’s unclear if Beijing would view a former leader as the best person to implement Xi’s new plans.

Hong Kong has had four chief executives, including two that weren’t previously in politics. Tung Chee-hwa was a shipping tycoon with family ties to Beijing before becoming the city’s first leader after British rule ended in 1997. Leung was also a private businessman before making an unexpected successful bid for the top job in 2012.

While it’s unlikely Beijing would permit surprises in the outcome of March’s small-circle election, a candidate could yet be plucked from outside politics, especially if they were trusted by the Communist Party.

Whoever the Election Committee picks, China always has the final stamp of approval -- and voters will likely have no doubt who Beijing wants to win.