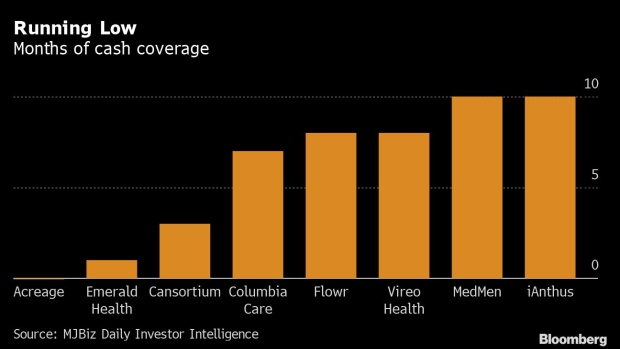 A customer wearing a protective face mask views a a product at the Harborside dispensary in Oakland, California, U.S., on Monday, March 23, 2020. California's shelter-in-place order vastly expands mandates put in place across the San Francisco Bay Area. It allows people in the most populous U.S. state to leave their homes for needed items like groceries and medicine, while otherwise requiring that they limit their social interactions. Photographer: David Paul Morris/Bloomberg , Bloomberg

Several cannabis companies are set to run out of cash in the next few months as capital markets grind to a standstill.

An analysis of 33 firms tracked by trade publication Marijuana Business Daily found that eight don’t have enough funding to last more than 10 months. It looked at the companies’ operating cash flow, cash on hand, unused credit facilities and new debt or equity and subtracted capital expenditures and debt due in 2020 to reach the conclusions, which were detailed in a presentation last week.

“It’s going to be an extinction-level event for some companies,” said Craig Behnke, equity analyst at the trade publication commonly known as MJBiz Daily. “But it’s a healthy and necessary process for any industry to go through once it’s had a phase of absolute excess and exuberance.”

Many cannabis companies were running low on cash and struggling to raise more before the pandemic, which only made the situation more difficult as equity markets tumbled and volatility spiked. The total amount of capital raised by the industry fell 69% in March from a month earlier as funding sources dried up, according to Viridian Capital Advisors.

This has weighed on stock prices. The Bloomberg Intelligence Global Cannabis Competitive Peers Index fell more than 50% between mid-February and its recent low on March 18, and had already lost two-thirds of its value in the 12 months before that.

Based on an analysis of 1,400 consumer stocks during the tech bubble and the global financial crisis, Regan said pot stocks are likely to fall even further. In those two bear markets, valuations typically compressed 30% to 50%, falling to 2.4x sales or 7.5x Ebitda. While pot stocks have lost more than 50% on average, many are still trading above those multiples. This is particularly true in Canada, where the average enterprise valuations are 5x sales and 11.3x Ebitda.

Those that do survive will rebound sharply, but the trick will be picking the winners, he said.

“Even if the long-term cannabis investment thesis is intact, it’s going to come down to executing on that idea to actually realize that return,” Regan said.

Pot Use Reached All-Time High in March Amid Lockdown Measures

GW Pharma & Greenwich: Epidiolex Is No Longer Subject to the CSA