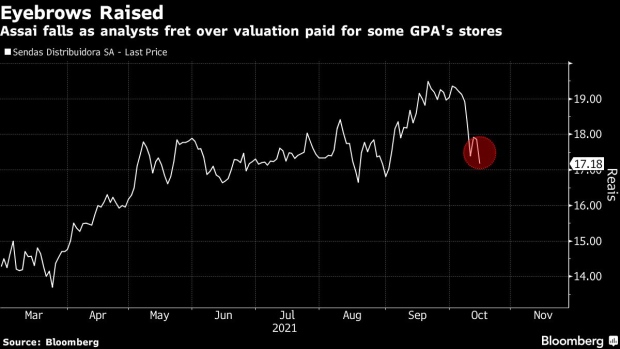 (Bloomberg) -- A transaction between Brazilian subsidiaries of French grocer Casino Guichard-Perrachon SA sent shares of one of them -- wholesaler Assai -- plunging as analysts fret over the valuation being paid.

Assai, which was spun off by Cia Brasileira de Distribuicao (GPA) earlier this year, agreed late on Thursday to buy 71 hypermarket stores of GPA’s Extra Hyper banner. The stores will be converted into the Assai brand and GPA will get up to 5.2 billion reais ($956 million) for the transaction, which also includes the sale of some real-estate properties, according to a filing.

Assai slid as much as 7.1%, with Itau BBA downgrading the stock on Friday to market perform from outperform. Shares of GPA surged as much as 20% in Sao Paulo after Bradesco BBI on Thursday said the deal was “almost too good to be true” for the firm.

Assai is paying the highest valuation per store “that we have ever seen,” Itau BBA analysts led by Thiago Macruz wrote in a report. The valuation paid by Assai is “too close to the limit for our comfort,” they added.

Representatives for Assai and GPA didn’t immediately reply to emailed requests for comment.

The transaction was voted on by independent members of boards from both firms, and those appointed by parent firm Casino abstained from voting, GPA Chief Executive Officer Jorge Faical told analysts in a conference call. In a separate call, Assai CEO Belmiro Gomes said the transaction was beneficial to the firm, adding that the market may “shoot first” to later try to understand the deal.

“We are deeply uncomfortable with the fact that minority shareholders are playing no part in the closing of this transaction,” according to Itau analysts.

GPA decided to exit the hypermarket segment in Brazil as it has been suffering from a drop in food volumes and a significant decline in consumer electronics sales, Faical said. The company, which had a market capitalization of nearly 7.5 billion reais as of Thursday, expects to invest around 1.2 billion reais in the short term in more attractive segments, Faical said.