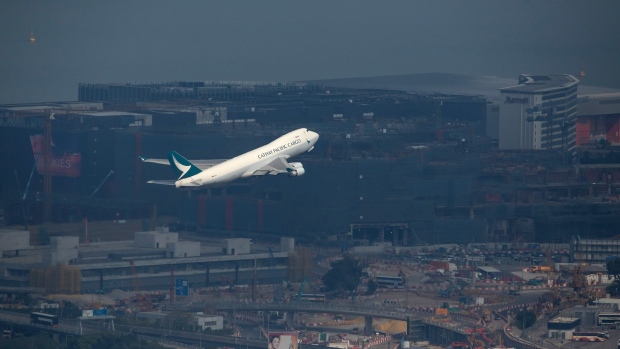 Workers with Hong Kong's Agriculture, Fisheries and Conservation Department remove small animals from the Little Boss pet store in Hong Kong, China, on Tuesday, Jan. 18, 2022. Hong Kong, suspecting that imported hamsters may have spread Covid-19 to humans, ordered the culling of thousands of the small mammals, closed shops selling them and sent more than 100 pet shop visitors into quarantine camp as part of its increasingly fervent quest to eliminate the virus. , Bloomberg

(Bloomberg) -- Cathay Pacific Airways Ltd. is offering bonuses of up to HK$29,000 ($3,700) to pilots willing to endure Hong Kong’s strict quarantine regime in a bid to get more planes in the air.

Closed-loop flights involve aircrew operating flights for three to four weeks non-stop, staying in hotel isolation between flights and then spending up to two weeks in quarantine at the end of their deployment before being allowed to return home. The onerous conditions and long absences from family and friends has made it difficult for Cathay to adequately staff and operate its services.

The carrier is operating just 2% of pre-pandemic passenger capacity and 20% of pre-Covid cargo capacity -- the lowest level at any time since the start of the pandemic.

Airline crew ni the Asian financial hub have also come under close scrutiny after being blamed for an outbreak of the omicron variant in the city, which is hewing to a strict Covid-Zero policy. Two former Cathay workers were arrested earlier this week for breaking pandemic rules, and face fines and six months in jail if convicted.

Hong Kong’s adherence to a Covid-Zero strategy of trying to wipe out all virus cases at any cost has left it increasingly isolated, as other parts of the world start to live alongside Covid and shun harsh curbs like mandatory quarantines and lockdowns. The government is focused on reopening the border with mainland China, the last significant Covid-Zero holdout after countries like Singapore and Australia pivoted to viewing the virus as endemic.

The city on Tuesday ordered the culling of thousands of hamsters, rabbits and chinchillas after an outbreak of the delta variant was traced to a pet shop, where nearly a dozen hamsters imported from the Netherlands were found to be infected with Covid.

According to an American Chamber of Commerce survey, 53% of members are considering leaving Hong Kong on personal grounds. With quarantine measures affecting businesses, about one-third of respondents said they were forced to delay new investments while another 30% struggled to fill senior executive roles, the South China Morning Post reported.