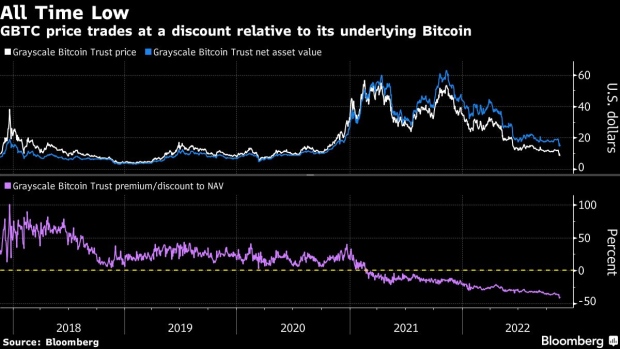 (Bloomberg) -- The Grayscale Bitcoin Trust’s record discount to assets has finally got too much for Cathie Wood to ignore.

Wood’s purchases come as the trust, which is solely invested in Bitcoin and meant to track its price, has languished near an unprecedented discount relative to the value of its underlying cryptocurrency. The dislocation is a product of the fund’s structure, which doesn’t allow for redemptions, meaning that shares can’t be destroyed to keep pace with shifting demand. That dynamic has widened GBTC’s gap dramatically in the past week, as fallout from crypto exchange FTX’s shock Chapter 11 bankruptcy filing drags Bitcoin lower.

GBTC is the ninth largest holding in ARKW, which has held shares of the trust since late 2015.

While long-term holders of the $10 billion Bitcoin fund have been punished by the discount -- the trust has surged nearly 1,200% since the start of 2016, compared to Bitcoin’s meteoric 3,700% rise -- the dislocation could also be seen as an opportunity.

Buying GBTC at a 40% discount to its net-asset value is akin to buying Bitcoin near $11,000, versus its current price of $16,400, according to Bloomberg Intelligence.