The biggest slide in months for Cathie Wood’s funds is testing the resolve of investors who plowed billions of dollars into one of the hottest firms on Wall Street.

All five of Ark Investment Management’s active exchange-traded funds slumped on Tuesday, with the company’s US$27 billion flagship ETF tumbling as much as 12 per cent and heading toward its worst back-to-back rout since September. The tumble came after investors collectively piled US$6.2 billion into the product since the beginning of the year, according to data compiled by Bloomberg. Activity for the fund was intense in the first hour of trading, with about US$2.5 billion worth of shares changing hands.

As its top holding Tesla Inc. drops alongside Bitcoin -- Wood’s other big bet -- the question is whether the US$18 billion invested in Ark products this year alone will stick around. The skyrocketing popularity of Elon Musk’s company, which currently comprises about 8.7 per cent of the Ark Innovation ETF (ARKK), helped fuel an almost 150 per cent surge in 2020. Both the electric-car maker and the fund are being dragged down this week amid growing concerns about valuations for the companies that have led the bull-market in stocks, just as an increase in Treasury yields fuels worries over a pickup in inflation.

“The patience for investors that arrived to the ARKK party in 2021 after triple-digit returns will be tested if the fund inevitably has a week or two of declines before recovering,” said Todd Rosenbluth, CFRA Research’s director of ETF research. 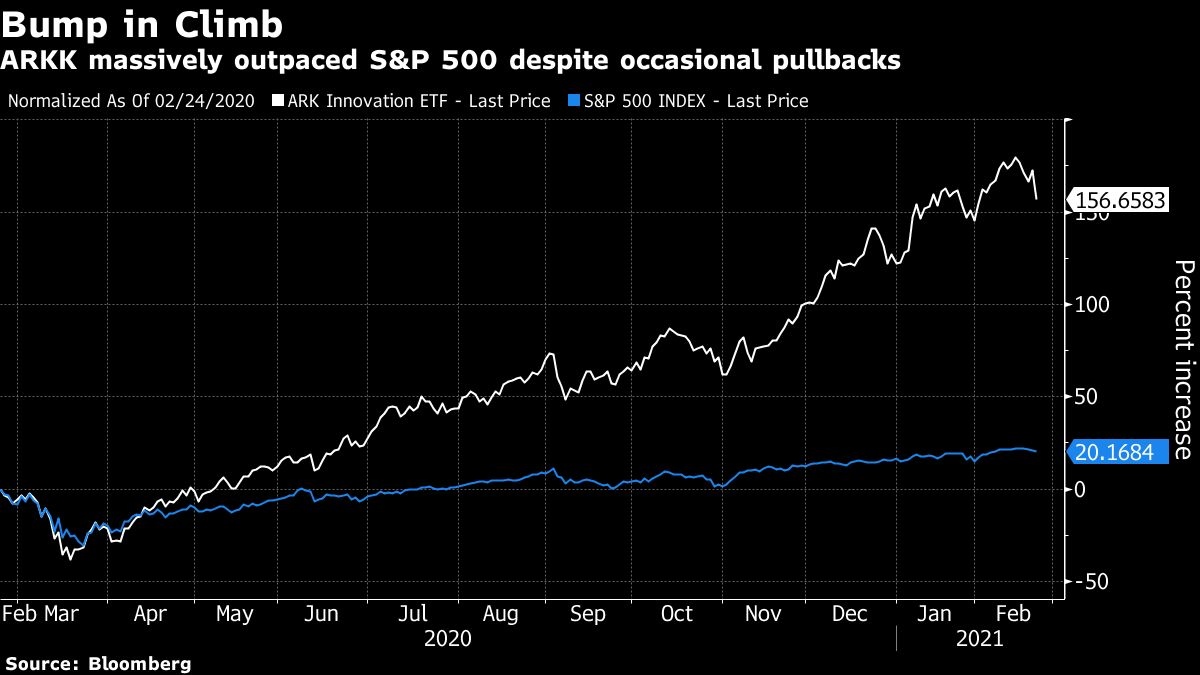 History suggests there’s a good chance investors will hang around -- for now at least. In ARKK’s previous pullbacks, inflows barely missed a beat. In fact, since the stock-market lows in March, it’s only faced nine days of outflows, and never more than three in a row.

Take the September technology plunge, for instance, when lofty valuations and skepticism about further gains in growth names triggered a pullback. Tesla’s 21 per cent slide dragged ARKK down about 15 per cent. Following the drop, the fund only lost about US$77 million in outflows over the course of three days and went on to end the month with US$674 million in inflows, as Wood bought even more Tesla stock.

Even when ARKK fell about 6 per cent at the end of January, as the speculative frenzy around GameStop Corp. and other retail stocks grabbed investors’ attention, it only lost a net US$16 million.

Even with the recent pullback, the fund is still showing an eye-popping performance. It’s taken in almost US$3.1 billion so far this month and its 2021 gain is close to 10 per cent, compared with just 2.5 per cent for the S&P 500.

“It’s probably going to take more of a decline for it to test the resolve of many investors,” said Matt Maley, chief market strategist at Miller Tabak + Co. “It has had such a great run that many investors are likely to see this as a buying opportunity.”