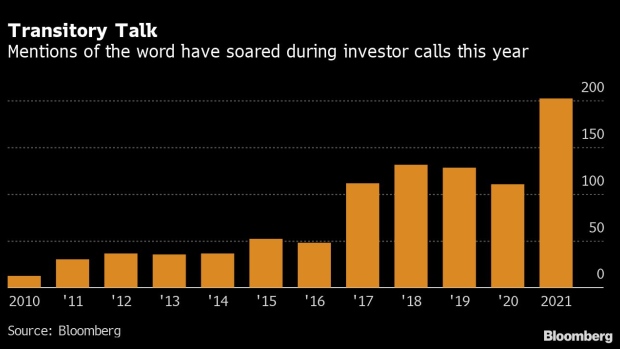 (Bloomberg) -- As inflation continues to creep up on consumers, company executives want to communicate one thing above all else: It’s transitory.

Officials at S&P 500 companies have mentioned the word 210 times this year on investor calls as of Tuesday, a tally that far surpasses the previous high in 2018, according to a Bloomberg analysis of investor call transcripts. Leaders at Nike Inc., Hershey Co. and Delta Air Lines Inc. are among those to have used the term on conference calls.

The word’s jump in popularity is likely due to its repeated use by the U.S. Federal Reserve, where officials have used the term in a bid to tame market jitters about higher prices. But with inflation remaining stubbornly high, there’s vigorous debate among economists over whether the bout will prove temporary or persistent.

For now, many corporate leaders are projecting that rising prices will fade. Sysco Corp. Chief Executive Officer Kevin Hourican, for example, said during his company’s second-quarter call that while shortages of labor and products are “undoubtedly” creating pressure on the company, “I would describe these incremental costs as mostly transitory.”

When executives use the word, however, it’s not always referring to inflation. Rodney McMullen, the CEO of Kroger Co., for example, used it in reference to supply-chain issues. Dollar Tree Inc. CEO Mike Witynski made a similar observation.

For many, higher costs and supply-chain difficulties are tied up as part of the same problem. Transitory still hasn’t been uttered more than “supply chain,” which has had over 3,000 mentions this year as companies struggle to get goods to consumers and onto store shelves, but its use is clearly on the rise.

It’s also being used to describe the impact from the delta variant of Covid-19 that has sparked renewed caution and safety measures. ManpowerGroup Inc. CEO Jonas Prising said both supply-chain challenges and delta’s impact will be transitory. “We remain optimistic and confident in the demand outlook once the effects of the pandemic normalize,” Prising said Tuesday during a conference call.

“Transitory has been the word the Fed has used to describe inflation, so it makes sense it’s the word everyone is using,” said Veronica Clark, an economist with Citigroup Inc. “But it’s a confusing term to use when you’re describing something that’s lasting for more than a couple of months.”

She said the Federal Reserve has recently moved toward words like “episodic” to avoid confusion over how “transitory” inflation could last so long. “When you get to six months, a year -- the connotation of that word is much less accurate,” she said.

So far, episodic doesn’t seem to be catching on in the same way -- it’s only been spoken 70 times this year during conference calls, transcripts show.