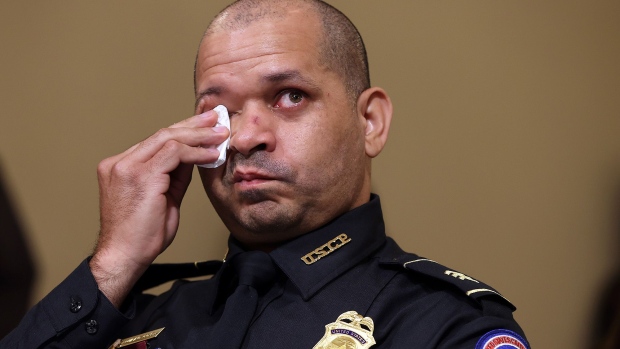 (Bloomberg) -- A special House panel convened to investigate the Jan. 6 insurrection at the Capitol with testimony from four of the police officers overrun by the mob of former President Donald Trump supporters seeking to disrupt certification of the electoral votes from the 2020 presidential election.

The seven Democrats and two Republicans on the committee were selected by House Speaker Nancy Pelosi. GOP leader Kevin McCarthy has refused to seat Republican members after Pelosi vetoed two of his choices.

Wyoming Republican Representative Liz Cheney took aim at Trump indirectly in her opening statement, saying the investigation should not be limited to what happened at the Capitol.

“We must also know what happened every minute of that day in the White House -- every phone call, every conversation, every meeting leading up to, during and after the attack,” Cheney, who is taking on the unofficial mantle of ranking Republican on the committee, said.

Cheney, who lost her position earlier this year as the third-ranking House Republican, spoke to the unusual circumstances of her serving on the committee at the request of Pelosi, not her own party.

“I have been a conservative Republican since 1984 when I first voted for Ronald Reagan,” she said. “I have disagreed sharply on policy and politics with almost every Democratic member on this Committee.”

But Cheney stressed the need to “get to the objective truth” of what happened that day.

“Will we adhere to the rule of law, respect the rulings of our courts, and preserve the peaceful transition of power?” she asked. “Or will we be so blinded by partisanship that we throw away the miracle of America?” -- Billy House

Committee Chairman Bennie Thompson opened the hearing Tuesday saying “there’s no place for politics or partisanship in this investigation.”

“We need to understand how and why ‘the Big Lie’ festered,” and how to fix the damage, the Mississippi Democrat said. “It won’t be easy work.

Thompson said much is already known -- that the insurrection was a violent attack, that those “who stormed the Capitol wanted to derail the peaceful transfer of power in this country,” and that “the rioters came dangerously close to succeeding.” He said the officers testifying Tuesday are among those who courageously fought to hold the line that day.

“Some people are trying to deny what happened. To whitewash it,” Thompson said. “But the whole world saw the reality of what happened on January 6th. The hangman’s gallows sitting out there on our National Mall. The flag of that first failed and disgraced rebellion against our union, being paraded through the Capitol. The hatred. The bigotry. The violence.” -- Billy House