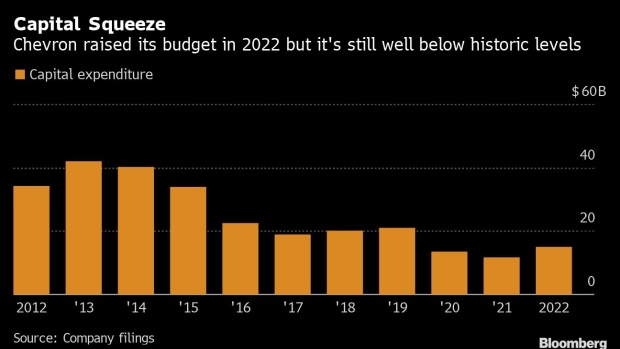 (Bloomberg) -- Chevron Corp. will allocate an extra $2 billion to capital expenditures next year as it weighs demands for higher investor returns amid calls from US President Joe Biden for the US energy industry to reinvest more profits in production.

The US oil giant said Wednesday it will spend $17 billion in 2023. That’s at the top end of the range the San Ramon, California-based company forecast starting in late 2021, and which was reiterated most recently by Chief Financial Officer Pierre Breber in October. It’s also 13% above what the company plans to spend this year.

The Permian will account for $4 billion of the total spend next year. Chevron is seeking to accelerate US shale production, which is low-risk and offers quick financial returns compared with the multi-year megaprojects that dominated much of the last decade. Spending in the basin assumes “low double-digit cost inflation” while expenses globally are likely to rise in the mid-single digit percentages, Chevron said. Its low carbon business will receive $2 billion, double the level this year.

“We’re maintaining capital discipline while investing to grow both traditional and new energy supplies,” Chief Executive Officer Mike Wirth said in a statement. “Our capex budgets remain in line with prior guidance despite inflation.”

Biden spent much of this year lambasting major oil explorers for reinvesting what he said was too little of windfall profits. Russia’s invasion of Ukraine triggered a surge in energy prices and energy company earnings, while pump prices squeezed consumers.

Chevron’s spending next year will be considerably above the pandemic years of 2020 and 2021, but still around half the $30 billion annual average of the 2012-2019 period.

Wirth has said Chevron’s spending is much more efficient than in the past, meaning the company produces more oil per dollar invested. But it also comes amid intensifying focus on improving investor returns. Chevron is currently spending $6.5 billion a quarter on dividends and share buybacks, or $26 billion a year, well in excess of capital spending.

Chevron’s shares were unchanged in after-market trading in New York on Wednesday, after closing at $172.52. They have gained 47% this year.

(Updates with date of earlier forecast in second paragraph)