Fast-food titans, embroiled in a chicken-sandwich battle, are trying to beat each other with small weapons.

Little chickens, whose quarter-pound breasts fit perfectly inside a bun, are proving essential to the war effort. In the process, they’re getting harder to come by.

A shortage of the smaller birds derailed the Popeyes challenge to reigning champion Chick-fil-A last summer, and most petite poultry are sold in grocery stores, not in chain restaurants. Now the supply will be further tested as more competitors jump into the fray. McDonald’s Corp., the world’s biggest restaurant chain, is testing new fried-chicken sandwiches in four U.S. cities with the added pop of MSG, a controversial flavour enhancer it says it doesn’t use in its national menu. Wendy’s Co. is going all in, spending US$30 million to beef up its chicken supply chain.

Chickens have been the most popular meat in America for a long time. More chicken is devoured in the U.S. than anywhere else in the world — an average of 93.5 pounds per person last year, according to the National Chicken Council. The birds have been getting progressively bigger over the years. Today’s broiler varieties, the ones raised for meat, average more than 6 pounds (2.7 kilograms) each. In 1925, they weighed 2.5 pounds.

So how did these fast-food chains so quickly find success with their chicken sandwiches? Birds lighter than 4.25 pounds.

The summer skirmish focused Big Chicken’s attention on the smaller and less plentiful variety. Breasts from wee birds recently reached triple the cost of breasts from a “jumbo” nine-pounder, a historically wide difference, according to Russ Whitman of commodity researcher Urner Barry.

When it comes to sandwiches, small is beautiful. Cutting up a bigger portion takes labour, and what does one do with the trim? Restaurants want product that comes ready to go at the right specifications, said David Maloni, executive vice-president of analytics at supply-chain consultant ArrowStream.

“It’s getting harder and harder to get that” smaller bird, “so they’re paying a premium,” Maloni said. The fast-food chains won’t settle for bigger birds, he said. 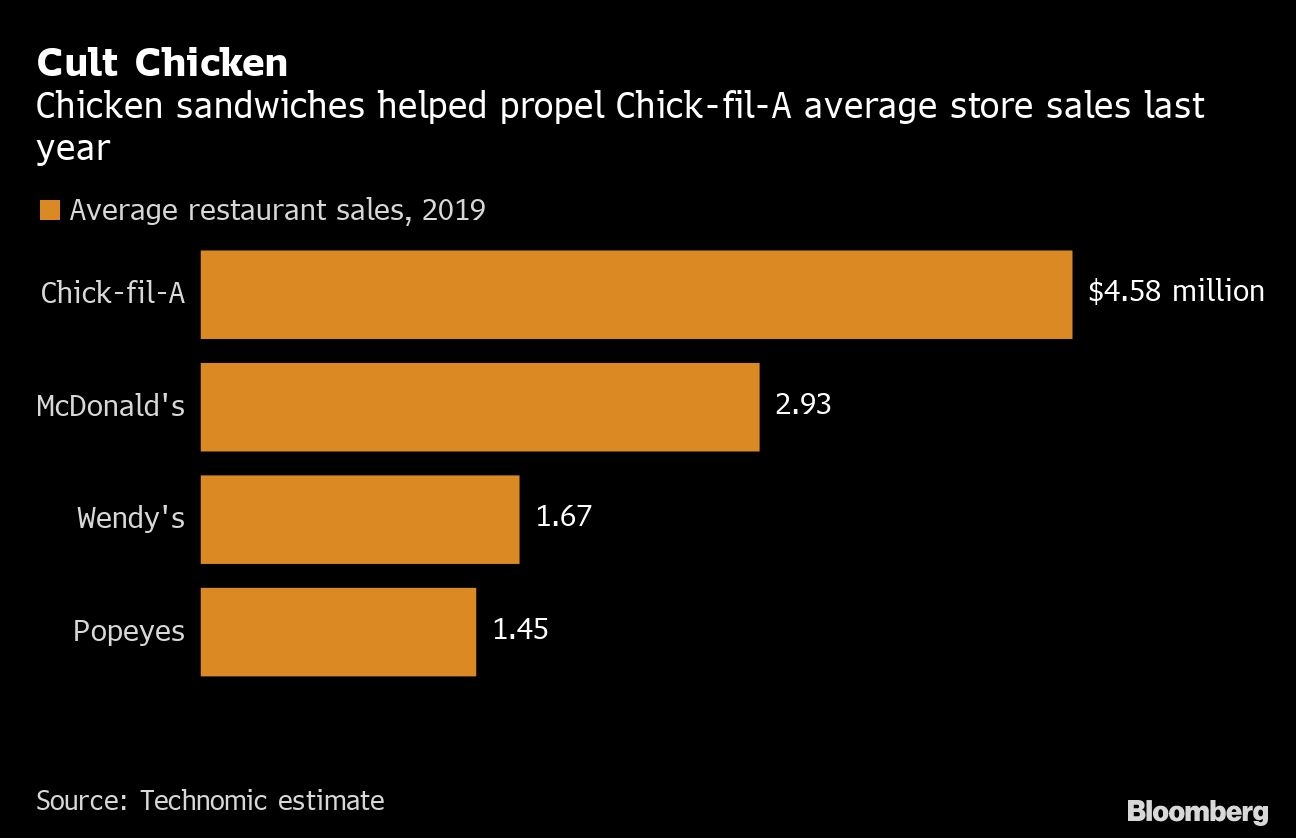 Chick-fil-A total sales at its 2,470 locations rose 13 per cent last year, boosted by the closely held chain’s fried-chicken sandwich, according to Technomic data. The company’s ascendancy led Mark Kalinowski of Kalinowski Equity Research to say that Chick-fil-A poses “the largest competitive threat” to McDonald’s in the U.S.

Popeyes Louisiana Kitchen, owned by Restaurant Brands International Inc., said the demand for its new sandwich last summer was so overwhelming that it ran through what it thought would be several months of supply in 14 days. It took until November for the company to bring the sandwich back. In the third-quarter of 2019, same-store U.S. Popeyes sales rose 10 per cent to one of the highest levels in two decades.

KFC, operated by Yum! Brands Inc., took a hit, with comparable sales dropping last quarter. In October, the chain said its limited-time Cheetos-chicken sandwich didn’t catch on with customers and led to the decline. KFC didn’t respond to requests for comment. 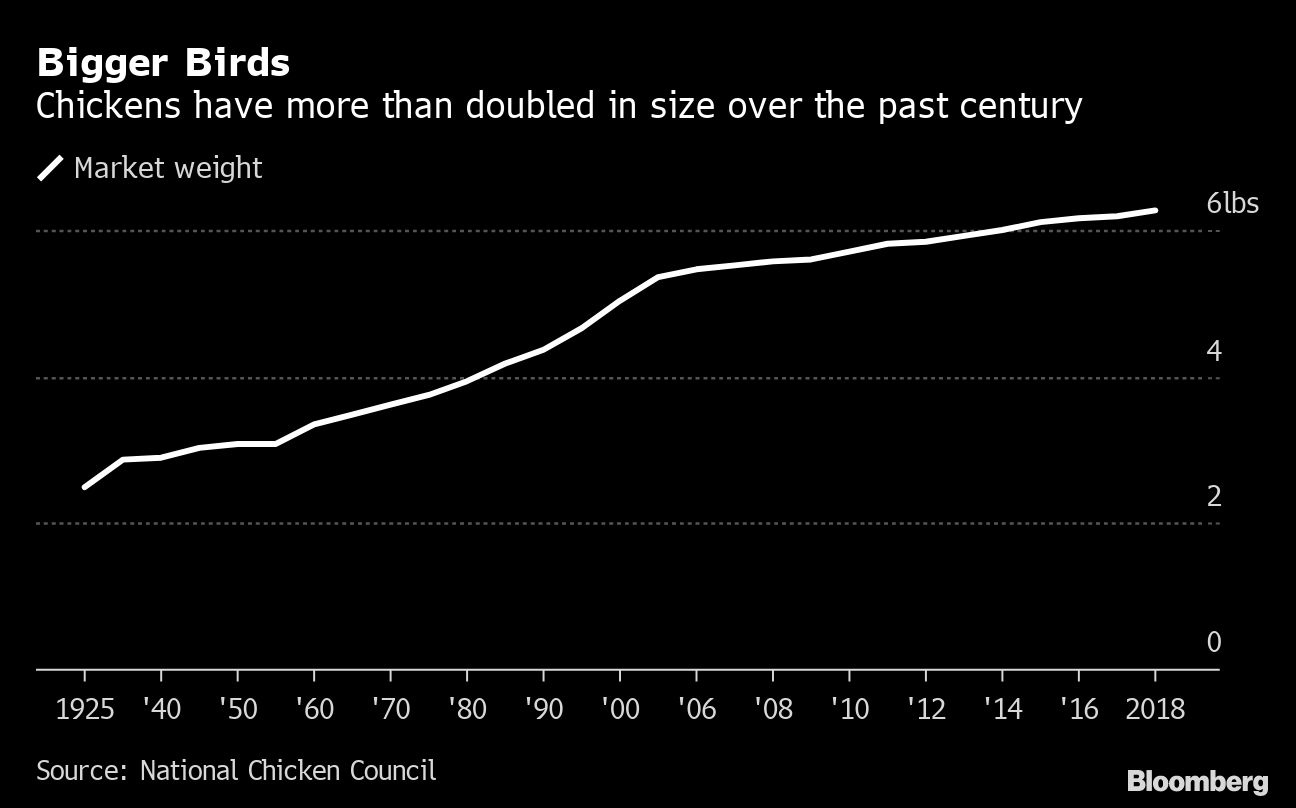 McDonald’s and Wendy’s, on the other hand, have been gearing up. Late last year, McDonald’s began testing new chicken sandwiches in a couple hundred restaurants, mostly in Houston, Seattle, Knoxville, Tennessee, and Augusta, Georgia.

Like Chick-fil-A, Popeyes and KFC — but not Wendy’s — McDonald’s is adding monosodium glutamate to its sandwich. While MSG is generally safe, according to the Food and Drug Administration, its use is controversial because some people complain of side effects such as headache, numbness and heart palpitations.

In 2017, Wendy’s said it was slashing its average chicken size by 20 per cent to improve its “tenderness and juiciness.”

“We saw instant feedback from our customers, who told us our sandwiches across the entire chicken lineup were juicier and more tender,” said Liliana Esposito, chief communications officer for the chain.

The little-chicken shortfall looks like it’ll persist. Last year through Nov. 16, the poultry industry raised 10% more birds above 7.76 pounds, considered jumbo, than they did in the same period in 2018, Urner Barry’s Whitman said. The small ones saw a headcount drop of 2%.

“Whatever demand growth we might have on smaller breasts, there’s no new supply to meet that demand,” said Will Sawyer, an animal-protein economist at Colorado-based rural lender CoBank ACB. “Everyone wants a bite out of that market.”

To contact the editors responsible for this story: Sally Bakewell at sbakewell1@bloomberg.net, ;James Attwood at jattwood3@bloomberg.net, Bob Ivry, Jonathan Roeder