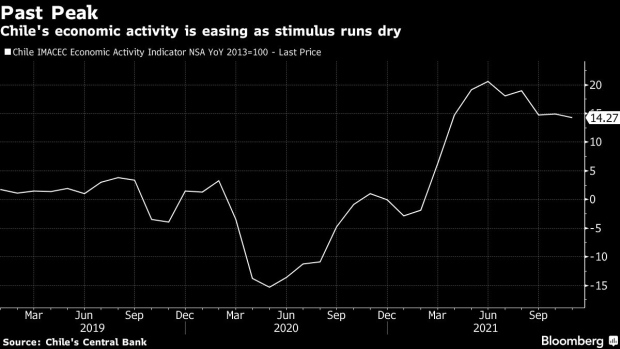 The bank on Wednesday will raise the benchmark rate to 5.25%, a level unseen since January 2012, according to 10 of 13 analysts in a Bloomberg survey. The others expect an even steeper increase of 1.5 percentage points.

Outgoing bank head Mario Marcel will not partake in the decision, leaving it in the hands of the four remaining board members. President-elect Gabriel Boric tapped Marcel as finance minister, and during his last days at the bank he will be focused on ensuring a smooth transition, according to a statement on Friday.

Chile’s central bank is aggressively boosting rates to combat inflation. Consumer prices have risen more than forecast for sixth straight months as fuel costs surge and workers continue to spend billions of dollars from last year’s fiscal stimulus. Traders and economists surveyed by the monetary authority see cost of living rises above the 3% target over the next two years.

“We expect Chile’s central bank to maintain the tightening pace from previous meetings and raise its benchmark rate by 125 basis points to 5.25% on Wednesday. Policy makers are likely to anticipate additional hikes in line with forward guidance for tight monetary conditions early this year. The resignation of central bank Governor Mario Marcel is unlikely to change the monetary policy outlook in the short-term.”

Policy makers’ decision will be published on the bank’s website at 6 p.m. local time in Santiago, together with a statement from board members. Here’s what investors will be looking out for:

First and foremost, economists will be looking for signs of a slowdown in the pace of monetary tightening going forward. Wednesday’s hike will drive borrowing costs above the neutral level, meaning that they will restrain economic activity. It will also bring total rate increases since July to 475 basis points.

“We will be looking for signs of moderation through the bank’s bias,” said Sebastian Diaz, an economist at Pacifico Research, who added that policy makers have recently underscored that they do not want to surprise markets.

In the minutes to their previous meeting in December, bank board members wrote it was important for the key rate to “move toward a restrictive level.”

Analysts point to fuel costs as a top risk to monetary policy making in early 2022, when annual inflation will remain above 7%. The central bank expects consumer prices to end this year at 3.7%, according to estimates published in December.

Policy makers’ views on activity, and how fast last year’s stimulus-driven boom is losing steam, will also be on investors’ radar. The economy likely expanded near 12% in 2021, a record pace that can’t be sustained for too long.

Boric has pledged fiscal restraint and also vowed to oppose additional early pension withdrawals, confirming a pull-back on drivers that sparked demand. On the other hand, the labor market is on the mend, and many Chileans socked away part of the emergency cash in bank accounts that can be easily accessed.