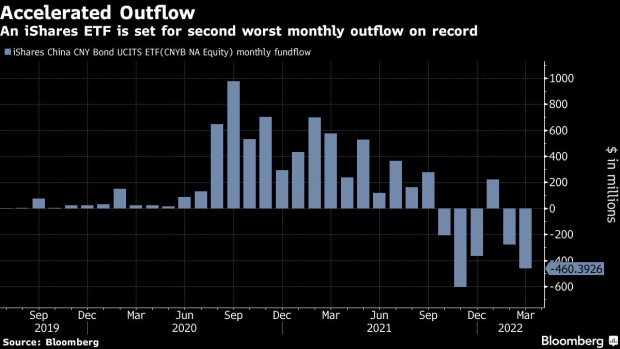 (Bloomberg) -- The biggest exchange-traded fund tracking yuan bonds recorded a whopping $460.4 million of outflows so far this month, adding to recent signs of an exodus from Chinese assets.

“The Russian invasion of Ukraine has essentially brought into play a new downside scenario for Western holders of Chinese bonds, whereby sanctions and debanking, and the reciprocal use of capital controls, pose a non-negligible yet catastrophic risk,” Grant Wilson, Exante’s head of Asia Pacific, said in an email interview Friday.

A narrowing yield premium over Treasuries and the risk of U.S. sanctions due to China’s ties with Russia have damped the appeal of yuan debt. The Institute for International Finance said investors pulled money out of the Asian nation on an “unprecedented” scale since the war in Ukraine began in late February.