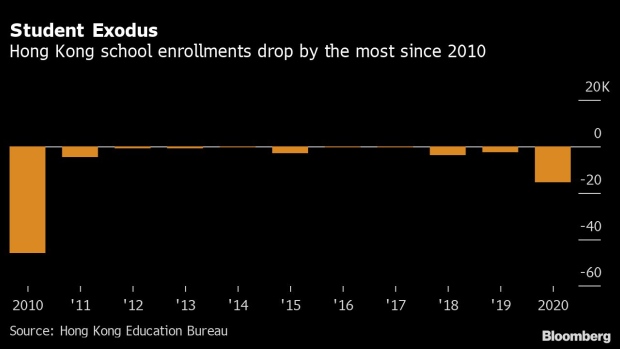 (Bloomberg) -- Disillusioned by China’s crackdown on dissent in Hong Kong, engineer Alan Chan emigrated to the U.K last month with his wife and 10-year-old son. Like many other parents, his decision to leave the former British colony was influenced by Beijing’s overhaul of the education system.

“The political changes during the past two years in Hong Kong are suffocating,” said Chan, 46, who has settled in London. “I’d like my kid to grow up in a more democratic environment with a more liberal schooling.”

Thousands of residents have left Hong Kong since China passed a national security law last year in response to pro-democracy protests that swept through the city in 2019. With youths at the forefront of the demonstrations, Beijing has blamed the education system for fostering unrest and ordered schools to adopt a more patriotic curriculum.

When the new academic year begins next month, yet more changes will be enforced -- leaving teachers under increased political pressure and some schools facing funding challenges as enrollment numbers plunge.

“The Chinese and Hong Kong government think the media and the education sector should bear the most responsibility for inciting youths,” said Ivan Choy, a senior lecturer in politics at the Chinese University of Hong Kong. “They believe both sectors have to be rectified.”

The emigration wave saw the city’s population drop 0.6% in 2020, the first annual decline in 18 years. It also resulted in the biggest drop-off in enrollments last year since 2010 -- a total decline of more than 15,000 primary and secondary students. That’s threatening the financial viability of some schools, which are losing both fees and government subsidies as students leave.

One prestigious school, which he declined to name, lost 160 pupils last year -- more than 10% of the student body.

The decline in enrollments is the biggest since 2010, the last year in which a mandatory exam meant many children were unable to proceed with their studies beyond the age of 17.

University and high school students comprised a majority of the frontline protesters in the 2019 unrest. In response, a pro-China curriculum was introduced in February, with children as young as six taught to memorize offenses criminalized by the national security law, including subversion and collusion with foreign powers.

When students and teachers return for the new school year next month, they will be subject to yet more changes.

A compulsory high school subject called Liberal Studies has been revamped after local pro-China politicians blamed it for radicalizing youths during the 2019 social unrest.

The subject, now called “Citizenship and Social Development” will begin in September. A sample paper released by the government last month revealed that students will be tested on topics such as the national security law and the integration of Hong Kong within a so-called Greater Bay Area with Shenzhen and other mainland Chinese cities.

“I fear that the revamped subject will narrow students’ international vision and suppress their critical thinking,” said a 49-year-old mother who didn’t want to be identified making comments critical of the government. She’s planning to emigrate to Canada and will send her 14-year-old child to the country this month. “It could follow the blueprint of China’s education curriculum,” she said.

The Hong Kong Education Bureau on Saturday announced it will cut ties with the largest teachers’ union in the city, accusing it of adding “fuel to fire” by supporting the pro-democracy movement. Chinese state media called the union a “tumor that must be eradicated.”

“Teachers are worried about receiving anonymous political complaints while having to adapt to new curriculum changes,” said Ip Kin-yuen, vice president for Hong Kong Professional Teachers’ Union. “Those who can’t bear it may choose to leave the city.”

In an emailed response to questions, the bureau said it is “our solemn duty to deliver on national security education so that Hong Kong students know their Chinese national identity and embrace the civic duty.”

The bureau dismissed any correlation between emigration and the latest curriculum changes, and said it would continue to monitor changes in student population and “encourage the sector to plan ahead.”

Meanwhile in London, Chan says he is looking forward to watching his son flourish in their new home.

“It’s a hard decision to leave Hong Kong that my wife and I have both grown up so freely in,” he said. “The problem is that we can’t guarantee the same environment for our son now, and we can only offer what we think is best for him.”