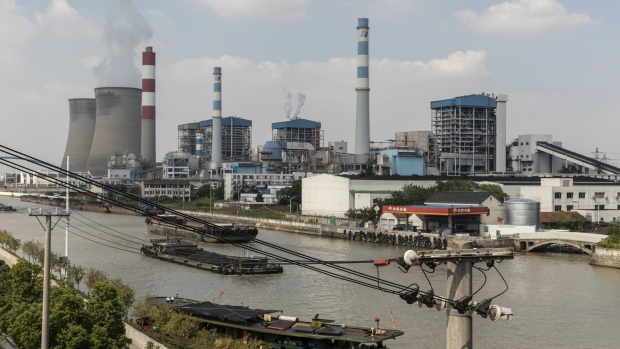 Barges travel past the Wangting Power Plant in Wangting, Jiangsu province, China, on Thursday, Sept. 30, 2021. China's central government officials ordered the country's top state-owned energy companies -- from coal to electricity and oil -- to secure supplies for this winter at all costs, according to people familiar with the matter. , Bloomberg

The nation’s updated pledge under the Paris Agreement, known as a National Determined Contribution, reiterated the second-biggest economy’s plan to reach peak greenhouse gas emissions before 2030, and to hit net zero by 2060.

In offering no advance on key targets already outlined last year by President Xi Jinping, China will add to a hardening belief that major agreements on accelerating action to limit global temperature rises to 1.5ºC will elude world leaders at the Scotland talks. Xi isn’t expected to attend.

A new UN assessment this week warned that without stronger efforts on emissions reduction, the world is on track for a 2.7 degrees Celsius temperature rise, an increase that risks catastrophic consequences. Most attention has been on major emitters like China and India to raise their level of ambition.

China can do more than any other country at this point to stem global warming. The nation is by far the world’s largest polluter, a major source of methane emissions, the biggest producer and consumer of coal, and has been pivotal in financing fossil fuel-fired power generation overseas.

A long-awaited road map released earlier this week detailed exactly how China plans to cap carbon emissions, setting out specific plans for action in sectors like steel-making and petrochemicals, along with targets for energy storage, zero-emissions transport and recycling.

China aims for non-fossil fuel sources to account for 80% of the energy mix by 2060, plans to begin reducing the use of coal from 2026 and expects to reach a “plateau” of oil consumption before the end of the decade. The country will also stop building overseas coal power plants, Xi told the United Nations General Assembly meeting in September.

In its NDC, China reiterated 2030 targets including cutting emissions per unit of gross domestic product by more than 65% from 2005 levels and increasing the share of non-fossil fuels in the energy mix to about 25%.

The nation’s approach has been complicated by an energy crisis that’s led to widespread power shortages in recent months, rippled through key manufacturing centers and prompted government intervention to tame wild gains in coal prices. This week’s road map emphasized the need for a “stable, orderly and safe” approach to reducing emissions.

Xie Zhenhua, who will attend the Glasgow conference as China’s special envoy for climate change, has also urged developed countries to provide money and technology to developing nations to help spur more action. Europe and the U.S need to “face up to their historical responsibilities” on climate issues, he said.

China is among key economies that missed a deadline set in July this year to submit new NDC plans for 2030. Under the Paris Agreement, countries are required to upgrade their commitments every five years.

(Updates with context throughout.)