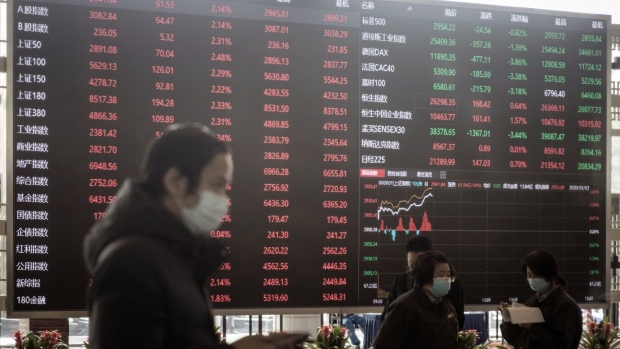 Employees and visitors wearing protective masks walk past an electronic stock board at the Shanghai Stock Exchange in Shanghai, China, on Monday, March 2, 2020. The pressure to get China back to work after the coronavirus shutdown is resurrecting an old temptation: doctoring data so it shows senior officials what they want to see. Photographer: Qilai Shen/Bloomberg , Lilian Karunungan, Netty Ismail and Aline Oyamada

(Bloomberg) -- Emerging-market assets are heading for a second week of gains as a surge in Chinese stocks boosted risk appetite and overcame ongoing coronavirus jitters. The rally was trimmed toward the end of the week after China’s authorities warned about the dangers of a potential equity bubble. Sino-U.S. tensions also remained on the market’s radar with the U.S. putting sanctions on a politburo member.

The following is a roundup of emerging-market news and highlights for the week through July 10: