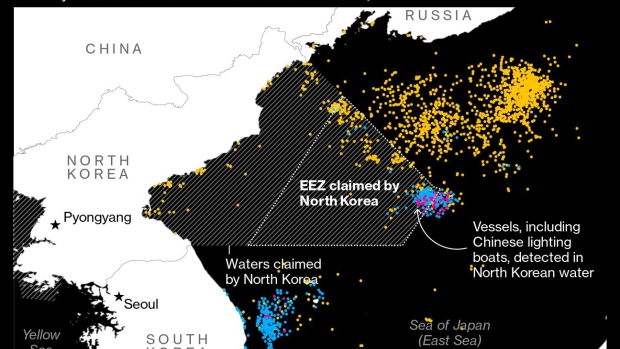 (Bloomberg) -- Hundreds of industrial fishing vessels originating from China have been detected in North Korean waters in recent years in one of the largest known cases of cross-national illegal fishing, new research by Global Fishing Watch shows.

Using a variety of ship detection methods, 700-900 vessels that set off from China annually from 2017 through 2019 were spotted fishing in North Korean waters, leading to an estimated $560 million catch likely to be in violation of United Nations sanctions since Sept. 2017, according to the global non-profit group, whose data has been used by the Food and Agriculture Organization.

The operations may provide hard currency for Kim Jong Un’s regime, which has been starved for cash due to the global economic punishments, it said. The sanctions have been imposed to punish North Korea for its tests of nuclear weapons and ballistic missiles.

The FAO has said that illegal, unreported and unregulated fishing has been depleting fish stocks worldwide. Global conservation groups suspect China of questionable activities in places from off the Horn of Africa to Arctic waters.

Naval resources have been stretched by disputes over illegal fishing by Chinese militia and government ships in the South China Sea, leading to a surge in piracy in places like the Strait of Malacca and waters off Singapore, according to data from ReCAAP ISC, a group formed by regional governments to combat piracy.

According to Global Fishing Watch, ships originating from China hauled in an estimated catch of more than 164,000 metric tons of squid in 2017 and 2018 worth $440 million. Last year, the estimated catch represented another $240 million, said the group, which was originally formed via a collaboration between Google and two environment organizations, Oceana and SkyTruth.

There are “substantial implications for fisheries governance and regional geopolitics,” according to the group’s analysis set to be published the journal Science Advances. “The vessels originate from China and, based on inspections by the South Korean authorities, are assumed to be owned and operated by Chinese interests.” Because the vessels often do not carry appropriate papers, they may plausibly also be operating outside of official Chinese authority, it adds.

This has also had an impact on domestic the fishing industry. According to Global Fishing Watch, more than 3,000 small-scale North Korean squid vessels were fishing, mostly unauthorized, in Russian waters in 2018. “These vessels were in Russian waters because they were likely displaced from their own domestic waters by the presence of the foreign industrial vessels,” the analysis of the findings states.

Seafood products were once a major source of cash for Pyongyang, which has been accused by the U.S. and others of using hard currency for illicit activities. The UN Security Council in 2017 adopted resolutions to sanction North Korea’s fishing industry preventing it from selling its products abroad or trying to earn money by selling its fishing rights to others.

Still, a UN Security Council report in March found Pyongyang “continued to earn income from the illicit sale of fishing rights.” North Korea took in $180 million in 2018 through a transfer of its fishing rights, the report sites a member state as saying, adding the vessels were often Chinese in origin and displayed North Korea fishing permit plates.

The office of the spokesperson for China’s Foreign Ministry said it wasn’t aware of the claims made in the UN Security Council report. “On implementing Security Council resolutions related to North Korea, there is no doubt China has always earnestly fulfilled its international obligations,” it added.

Chinese trawlers have been seen for years in the Yellow Sea on the North Korean side of a maritime border with South Korea, fishermen on South Korea’s Yeonpyeong island have said. The island is just 11 kilometers from North Korea’s coast.

(Updates with map after fourth paragraph)