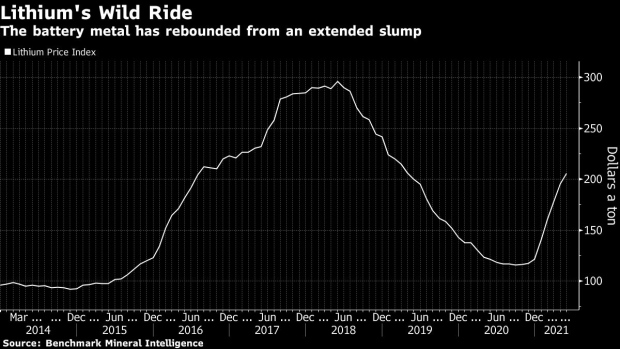 (Bloomberg) -- Ganfeng Lithium Co., the lithium supplier that’s extending an acquisition spree, says there’s a chance that a tightening market for the battery metal could push prices back toward a record high.

The world’s third-largest producer of lithium chemicals, used in batteries for electric vehicles to grid-scale energy storage, is positioning to capitalize as the market extends a rebound from a more than two year slump that ended in September.

“The industry is rapidly growing and we have a very upbeat forecast on lithium consumption,” Vice Chairman Wang Xiaoshen said in an interview. “I can’t rule out the possibility for lithium prices to bounce back to the 2018 level.”

Lithium prices surged from 2015 to mid-2018 as rising demand from electric automakers outpaced available supply from a small network of mining and refining companies. A subsequent rush to add new sources of raw materials, chiefly from Australian mines and South American brine operations, then sent the metal tumbling.

Moves by the industry to halt development of new projects amid that sell-off has meant a near-term tightening of the lithium market, and Wang said it’ll take time for the revived expansions and new operations to deliver new supply. That could see a deficit late this year or in 2022, he said.

At the same time, demand for both battery-powered vehicles and storage systems for renewable energy is building quickly. “We will step up efforts on the exploration of lithium resources to meet the market needs,” Wang said.

Jiangxi-based Ganfeng, which raised $628 million in a share placement this month, has made new investments recently in projects in Mexico and Mali, adding to stakes in mining and brine operations in locations including Argentina, Australia and China.

Accelerating sales of electric cars and government stimulus programs aimed at encouraging adoption of greener energy are adding to lithium’s positive outlook. Demand for lithium-ion batteries is expected to jump tenfold by 2030, according to BloombergNEF.

“Prices for lithium chemicals will still have room to rise by the end of the year, demand for EV batteries and energy storage is still strong,” said Xiaoyi Liu, an analyst at Shanghai Metals Market.

Still, there are risks of a repeat of the sector’s 2018 tumble, according to Wang. Prices could pull-back if miners fire up supply projects too quickly, or if the pace of EV sales slips, he said in the Monday interview.

While the lithium market will remain tight for the next two years, beyond that “lithium producers will need to manage supply growth in a sustainable manner to avoid another crash in prices as occurred in 2018,” BNEF analysts Kwasi Ampofo and Peng Xu said in a note this month.

Over the longer-term, the recovery of metals including lithium through battery recycling will also impact the market. Ganfeng currently has recycling facilities in China capable of handling about 65,000 tons of spent batteries a year, and is considering building overseas plants, according to Wang.

Until there’s a more developed electric car industry, and higher volumes of battery packs -- that typically last at least eight years in a vehicle -- it’s likely to remain a small source of supply, and may account only for about 10% to 15% of the lithium market after 2040, he said.

“We have customers and carmakers making queries over the supply of recycled lithium carbonate or hydroxide from retired cells,” said Wang. “It’s just that the batteries available for recycling are still relatively little at the moment.”