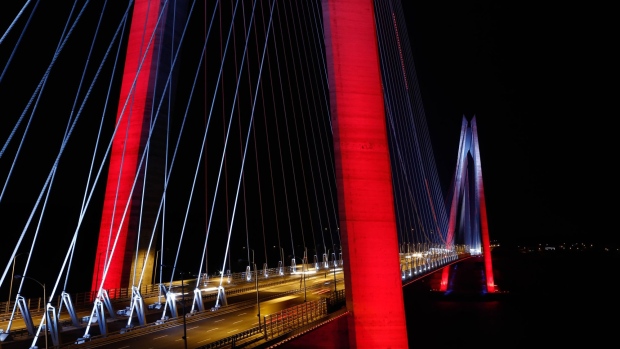 (Bloomberg) -- The sale of a stake in a major suspension bridge over the Bosphorus Strait in Istanbul is under threat because of disagreements about the deal’s funding, according to people familiar with the matter.

IC Yatirim Holding AS, which owns the company holding operational rights for the Yavuz Sultan Selim Bridge until 2027, has stopped discussions with a group of Chinese investors, the people said. China Merchants Expressway Network & Technology Holdings, owned by China Merchants Group Ltd., formed a consortium with five other investors and has been in talks to buy 51% of the bridge operator for about $689 million since 2019.

The deal’s success hinges on the refinancing of a $1.6 billion chunk of a loan used to finance the building of the bridge in 2013. Disputes over the precise terms of this refinancing, which is being backed by banks including Industrial & Commercial Bank of China Ltd., Bank of China Ltd. and China Merchants Bank Co., now threaten to scupper the deal, the people said.

IC Yatirim has rejected an offer from the Chinese buyers to put money covering the purchase into an escrow account until the loan refinance is agreed, and want the payment made upfront, one of the people said, asking not to be identified discussing confidential information.

The 1.4-kilometer (0.9-mile) Yavuz Sultan Selim Bridge and its associated toll roads have been in operation since 2016. Italian builder Astaldi SpA, which ran into financial difficulties at home following a domestic construction slump, previously sold its share of the project to IC Yatirim.

Discussions with the Chinese buyers had already been disrupted by the coronavirus pandemic, with talks delayed because bankers and executives weren’t able to travel between Turkey and China and had to communicate by video link, Bloomberg News reported last year.