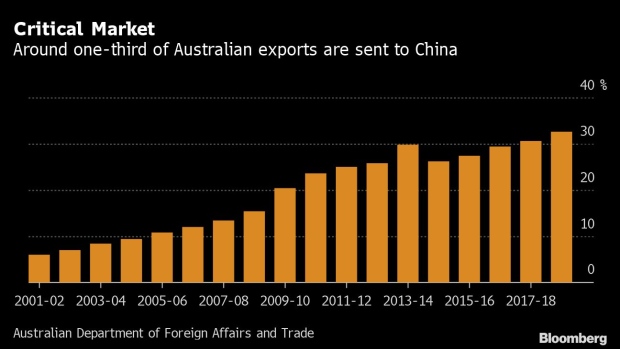 (Bloomberg) -- China has issued an alert warning its citizens not to travel to Australia in the latest sign of deteriorating relations.

The Chinese Ministry of Culture and Tourism published a statement on its website on Friday night saying that discrimination and violent behavior against Chinese and Asians are on the rise due to the Covid-19 epidemic. The ministry told Chinese tourists to be on alert for their safety and not travel to Australia.

The warning from Australia’s largest trading partner follows the imposition of tariffs on barley shipments after Prime Minister Scott Morrison led calls for an independent probe into the origins of the coronavirus in Wuhan. Australia is the most China-reliant economy in the developed world, leaving it vulnerable to diplomatic blowback.

Australia this month announced a tough new screening regime on foreign investors seeking to buy sensitive assets as it bids to bolster national security. Telecommunications, energy, technology and defense-manufacturing companies will be included in the zero-dollar threshold for screening.

The changes, intended to be legislated this year and enforced from Jan. 1, will include a new national security test and give the treasurer last-resort powers to force asset sales. Beijing responded with verbal attacks on the conservative Australian government, saying it was doing the bidding of key ally the U.S.

The tariffs on Australian barley imposed last month and a ban on beef from four meatworks have raised fears in Canberra that the Chinese government is using “economic coercion” in retaliation.

Before Australia’s calls for a probe into the origins of the coronavirus, its diplomatic ties with China were already under stress. The government cited Beijing’s “meddling” in national affairs as a catalyst for its anti-foreign interference laws passed in 2018, the same year it banned Huawei Technologies Co. from helping build its 5G network.