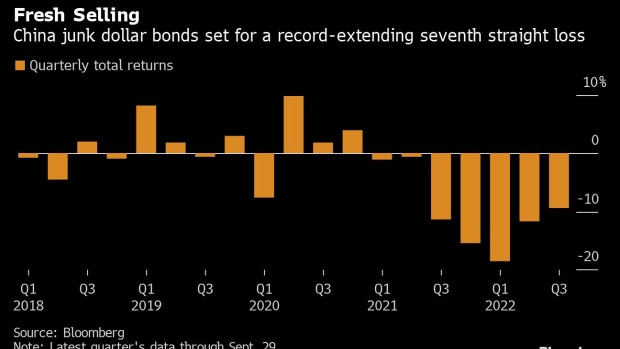 Workers at a construction site for the World Expo Culture Park in Shanghai, China, on Tuesday, Sept. 27, 2022. China faces increasing risks from deflation as demand crumbles under the weight of an ongoing property crisis and is threatened by continued Covid restrictions -- a stark contrast with other major economies, according to a private survey. Photographer: Qilai Shen/Bloomberg , Bloomberg

(Bloomberg) -- Chinese high-yield dollar bonds are capping a seventh-straight quarterly loss despite government efforts to stabilize the property sector, as fresh declines the past two weeks have re-emphasized the industry’s struggles.

The developer-dominated market for such debt has lost 9.5% since the start of July, according to a Bloomberg index, threatening to post a fifth-consecutive quarter of double-digit declines. The junk notes have dropped 8% in September and are poised to erase the largest monthly return in a decade posted in August. The bonds were slightly lower Friday morning ahead of a week-long holiday in China, according to several credit traders.

Average prices on the securities hit a record low last month, before policy steps including guaranteeing some builders’ new onshore notes fueled a rebound and kicked off hopes that the worst might finally be behind the market. But the high-yield dollar bonds’ gains stalled as September arrived despite continued efforts to support the property sector.

“Most investors deem the property market entering into a prolonged structural downcycle and it just doesn’t make sense for them to bet on property bonds,” according to CreditSights analyst Zerlina Zeng. State help hasn’t restored funding channels for builders, she said.

Home sales have fallen for more than a year, squeezing a key source of Chinese property firms’ liquidity, and few have been able to sell new debt offshore. Record defaults on dollar bonds have resulted alongside the weakest first-half earnings for developers since at least 2008, with the country’s slowed economy and Covid-19 lockdown further depressing homebuyer sentiment.