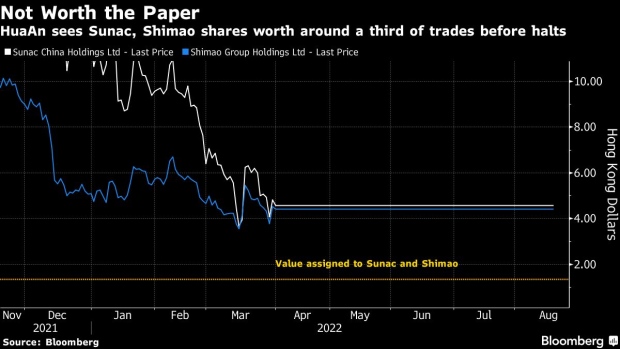 (Bloomberg) -- Shares of some of China’s largest property developers are now considered almost worthless by a mutual fund that holds the assets.

An exchange-traded fund run by HuaAn Fund Management Co. has assigned a value of HK$0.01 for each share of China Evergrande Group and Evergrande Property Services Group Ltd. in its portfolio, according to a statement late Tuesday. Before trading in those real estate companies was suspended in mid-March, their shares were at HK$1.65 and HK$2.30, respectively.

Evergrande, the world’s most-indebted developer, defaulted in December and fell short of delivering a promised restructuring plan last month, fueling concerns about its ability to repay investors and finish housing projects. Similar woes started showing up across many of China’s property firms, with Shimao Group Holdings Ltd. defaulting on a $1 billion bond and an increasing number of buyers of unfinished homes refusing to make further mortgage payments.

The valuations of Shimao and Sunac China Holdings Ltd. were also slashed by about two-thirds from their closing prices on March 31 in the HuaAn CES Hong Kong Stock Selected 100 ETF. Shares of these real estate firms remain suspended, after they failed to disclose audited fiscal results for 2021.

The revisions were applied Aug. 15, and are meant to objectively reflect the fair value of the assets after trading halts and index exclusions, the asset-management firm said.

Phone calls to the investor relations departments at China Evergrande, Evergrande Services, Sunac and Shimao were not answered.

READ: What’s Next for China Evergrande, Crushed by Debt?: QuickTake

Writing down the equity values of firms facing problems and in the midst of trading halts has precedents among China’s mutual funds.

HSBC Jintrust Fund Management Co. lowered the value of its holdings in Seazen Holdings Co. after the founder of the real estate developer was convicted of child molestation in 2019, while Tunghsu Optoelectronic Technology Co. was similarly slashed in valuation after missing a bond payment.