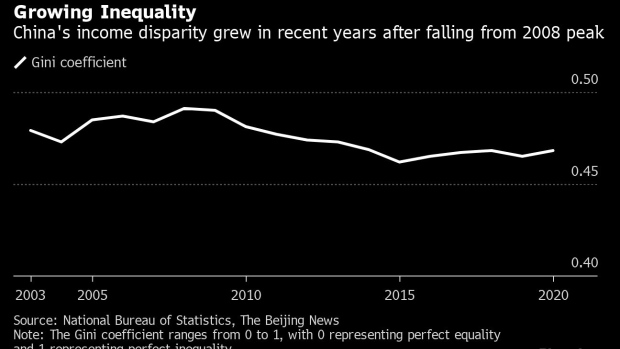 (Bloomberg) -- China needs to cut its Gini coefficient, a measure of income inequality, to under 0.4 in order to achieve common prosperity, an adviser to the country’s central bank said.

The Gini coefficient should be lowered from its current level of 0.47 to close to 0.4 by 2025 and then toward 0.35 by 2035, according to Cai Fang, a member of the People’s Bank of China’s monetary policy committee.

Cai’s comments are notable since government officials haven’t set national numerical targets for the Communist Party’s common prosperity drive, which was given high-profile backing by President Xi Jinping in August.

The Gini measure compares incomes at the top and bottom of the distribution, and a score of 0 would mean perfect equality. A level below 0.4 could make China more equal by that measure than the U.S., where the score was 0.41 in 2018.

Cai, who is also an economist at the state-run Chinese Academy of Social Sciences, said the nation needs to lower inequality through government income redistribution and increased spending on social services.

There was “a lot of work to do” in meeting the equality goal, he said in a speech to a forum organized by Chinese financial magazine Caijing.

The most important means to reach the goal would be “building a basic public service system that covers the entire life-cycle of everyone, which can be called a social welfare system,” he said.

China’s Gini coefficient for income peaked at 0.49 in 2008 before falling to 0.47 in 2020, according to the nation’s statistics bureau. The average Gini coefficient across advanced countries is 0.314, the Organisation for Economic Co-operation and Development estimated this year.

Cai said the Gini of OECD countries was generally above 0.4 before government redistribution of incomes. From this it can be concluded that “redistribution is an ultimate means to reduce the income gap,” he said.

Cai also said that China can reach its goal of doubling gross domestic product from 2020 levels by 2035 despite a falling working-age population due to continued urbanization, which draws workers from agriculture to more productive jobs.

Wang Xin, director of the PBOC’s research bureau, said at the same forum that “prudent” monetary policy, which avoided bubbles in asset prices would help protect the earning-power of low-income workers and narrow the gap between the rich and poor.