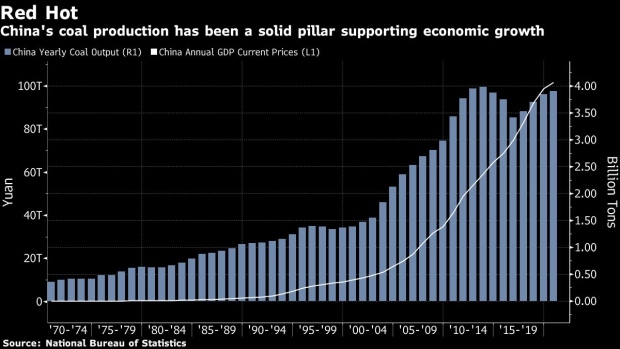 (Bloomberg) -- China’s leadership has told the country’s state-owned miners to produce coal at full capacity for the rest of the year even if they exceed annual quota limits as they struggle with the deepening power crisis.

The directive, along with other measures to secure energy supplies for this winter at all costs, was emphasized during emergency meetings this week in Beijing, according to people familiar with the matter. Boosting domestic thermal coal production is critical, said the people, asking not to be named as the discussions aren’t public.

The government has been holding a series of meetings with company executives this week in a sign of how serious the situation in China has become. Many regions have had to curtail the supply of electricity to the industrial sector, while some residential areas have lost power due to the energy crisis that’s gripped the world’s second-biggest economy.

Premier Li Keqiang has vowed that every effort will be taken to maintain economic growth. China will ensure the needs of basic livelihoods are met and will keep industrial and supply chains stable, he was cited as saying by China National Radio during a meeting with foreign diplomats on Thursday.

Several calls to the offices of the State Council, China’s cabinet, went unanswered.

China’s struggles have also been unleashing turmoil in global commodities markets, fueling rallies in everything from fertilizer to silicon. Authorities may be especially concerned about energy security this year, with the high-profile Winter Olympics due to be held in and around Beijing in February.

The country controls coal production under a quota system that caps annual output of mines in order to manage supply. Authorities have also been clamping down on illegal mining, blamed for a spate of fatal accidents. China is still the world’s largest producer of the fossil fuel, producing about 3.8 billion tons a year over the past decade, roughly half of global output. Coal accounts for around 70% of the nation’s electricity generation.

The cheap energy source has been key to China’s dramatic economic growth since the 1980s, but it also triggered criticism over the rise in pollution from mining and processing the fuel. Coal mines are under close environmental surveillance, and Beijing has been pushing for consolidation in the sector.

The nation’s top miner, China Energy Investment Corp., will produce 25% of its annual production capacity in the fourth quarter, it said on its official WeChat account late Thursday. “We will strive to achieve full production and increase supply,” said the company, whose coal output was 530 million tons in 2020.

Another state-owned miner, State Power Investment Corp., said on its WeChat account that it will deliver no less than 50% of its fourth-quarter output from operations in eastern Inner Mongolia to northeastern China, where some homes lost power last weekend. It will also sell 25% of its annual term-sales volumes to buyers nationwide this quarter, it said.

Chinese coal miners, especially private ones, have been reluctant to produce more as any new or reopened operations have to meet tighter environmental standards under President Xi Jinping’s green targets.

The penalty for violating workplace safety rules was raised from fines to possible jail time in March, making miners even more hesitant to boost production. Moreover, since China set a goal to lower coal’s share in its overall energy mix, some financial institutions have stopped lending to the sector.

Chinese coal futures surged to a record on Thursday before the week-long holidays. Prices have more than doubled this year amid soaring electricity demand from factories and slow output growth from mines.