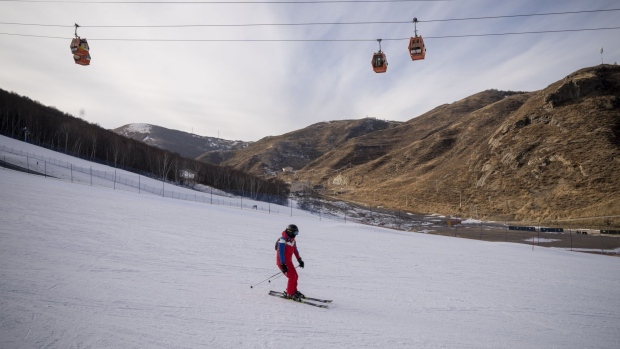 Snowboarders walk on artificial snow at Wanlong Ski Resort in the Chongli district of Zhangjiakou, which is helping to host the Beijing Winter Olympics. , Bloomberg

Weeks before the world’s best skiers and snowboarders descend on Zhangjiakou, a main site of the Beijing Winter Olympics, a dozen machines furiously churned out snow to cover the mountains they will race down.

The slopes were soon blanketed in white, and the canons didn’t stop there. A deafening sound continued for hours as they coated the rest of the grey landscape to complete a perfect snowy backdrop that could be broadcast around the world. The water droplets they sprayed into the air hovered like white smoke over the venue as freezing temperatures and chemicals helped turn them into ice.

Artificial snow has become a Winter Olympics fixture as climate change shrinks the number of countries that get enough natural snowfall to hold the event. But Beijing will be the first host to rely completely on man-made powder. The upcoming Olympics will also be the culmination of a six-year effort to turn Zhangjiakou into China’s version of the Alps, creating an upscale winter holiday destination in the hopes of lifting an agricultural region out of poverty.

Experts worry that the push to transform Zhangjiakou will worsen the region’s severe water scarcity, which ranks among the worst in the country. Over half of Zhangjiakou is “highly water stressed,” according to China Water Risk, a Hong Kong-based environmental group, and the local water resource per capita is less than one fifth of China’s national average.

“There is bound to be some impacts in a region where there is nearly no water in the winter,” said Carmen de Jong, a geographer at the University of Strasbourg. “For half a year, during the snow sports season, the water stays away from the natural ecosystem.” There’s also risk the fake snow could be harmful to the environment when it melts.

China could need as much as 2 million cubic meters of water — enough to fill 800 Olympic-sized swimming pools — to create enough fake snow to cover ski runs and access roads during the Games, according to de Jong.

There are some advantages to manufactured snow, which is more firmly packed and makes for more consistent and desirable slopes. But the amount of artificial snow has risen to unprecedented levels in recent years. About 80% of the snow at the 2014 Games in Sochi, Russia, was manufactured. When South Korea hosted in Pyeongchang four years later, that share rose to 90%.

Part of the problem this time around is that the arid Beijing-Zhangjiakou region isn’t ideal for manufacturing snow. Over the last four decades, average winter precipitation was only 7.9 millimeters. The European ski town of Davos in Switzerland gets nine times that amount in a typical December. Greenpeace estimates that Beijing’s temperatures could rise as much as 2.4 degrees Celsius on average as the planet warms. A warmer climate has already shortened the region’s winters by more than 10 days compared with the 1970s.

In Zhangjiakou, the dry weather means a significant amount of water tends to be lost due to evaporation and strong winds during the snow-making process. Engineers also have to pump water into the dry soil to freeze the ground before fake snow can be added above.

That hasn’t stopped China from investing heavily in Zhangjiakou’s tourism industry since Beijing won its bid for the Winter Olympic Games in 2015. Today it has seven bustling ski resorts and the city receives 3 million skiers annually. A fast train that opened in 2019 takes only 50 minutes from Beijing, enabling quick weekend trips. According to the State Sport Administration, China has already achieved its goal of having 300 million people participate in snow and ice sports. It’s also built 650 skating centers and 800 ski resorts nationwide.

One of Zhangjiakou’s most popular ski resorts, Thaiwoo, sits in a booming snow town lined with luxury shops selling ski gear and expensive hotels and restaurants. The government says the Games are a turning point, with infrastructure investments and jobs related to winter sports lifting more than 430,000 local residents out of poverty.

Still, officials are aware of the strain the Olympics puts on Zhangjiakou’s water supply. Zhao Weidong, a spokesperson for the Beijing Winter Olympic has said that almost 10% of water consumed in Chongli, a district of Zhangjiakou, will be used to make snow.

To alleviate that pressure and reduce groundwater extraction, China has built 11 water tanks near the venues to collect 530,000 cubic meters of water from surface runoff, rainfall and melted snow. Water from a reservoir in Yunzhou, a town that’s a two-hour drive away, will be piped in as well, according to Zhao.

Experts warn that the approach would still interrupt the region’s natural water cycle. The International Olympic Committee even flagged the issue as one of its chief concerns when considering China’s bid to host. Beijing “underestimated the amount of water that would be needed for snowmaking,” noted an IOC evaluation report published in 2015, and has “overestimated the ability to recapture water used for snowmaking.”

Water isn’t the only environmental concern. Making snow at such a large scale is an energy-intensive process that can at times spew tons of planet-warming gases. This appears to be a low risk, however, since all the snow canons used for the Games are powered by nearby wind farms, according to Jia Maoting, the head of Aoti Construction Development Ltd., which built some of venues.

Outside the ski resorts of Chongli lie endless miles of brown hills known as a poverty belt around the capital. Even with its dry climate, the Zhangjiakou region has long been used as a major water resource for Beijing, which also suffers from shortages. With few factories, the main economic activities have revolved around farming and husbandry until the push to build snow-sports tourism.

There should be a balance between the natural protection and development, said Zhang Junfeng, the founder of Le Shui Xing, a Chinese non-governmental organization that focuses on river protection and equal access to water. “It’s not all bad,” he said. “The water wouldn’t have been used by local people anyway,” he added, because so much of it is used to feed Beijing’s needs. “At least now some water stays and contributes to the local development.”

Despite promises of prosperity that the ski resorts would bring, some local residents have found only incremental improvements to their daily lives. Chen Jianyong, a 60-year-old farmer, has a second job as a cleaner at Thaiwoo. He says he’s glad the resorts hire locals like him during the cold months when they can’t farm.

But not everyone is happy about the changes. Ren, 54, was forced to relocate after his village was demolished to make room for luxury hotels. The development has destroyed forests and degraded soil in the area, says Ren, who only gave his last name. He earns 2,750 yuan ($430) a month cleaning ice off the street; the job was part of the deal he made with the developer who took his land.

“It’s good that we now have places to work,” said Ren, who now earns less than he used to as a farmer. “It just pays too little.”