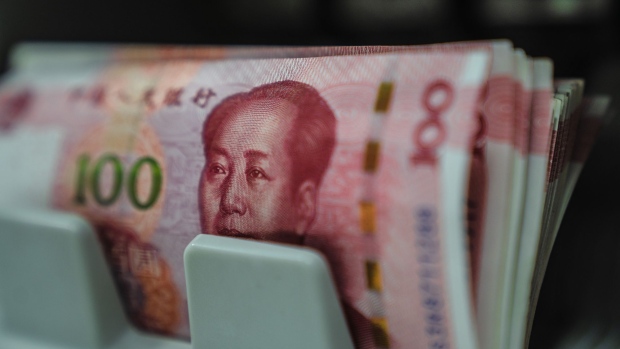 (Bloomberg) -- China withdrew short-term cash from the financial system for the first time in nearly two weeks, as a selloff in government and corporate bonds eased.

The People’s Bank of China net drained 2 billion yuan ($421 million) via its open-market operations on Monday, the first time since Nov. 9. It injected a total of 368 billion yuan last week via the tool, as onshore bonds got dumped by banks and fund managers due to retail investors’ redemption of their fixed-income assets.

Covid outbreaks in China’s major cities and the rising fear of fresh curbs has also hurt risk sentiment, helping to boost demand for haven assets and stabilize the bond market. Beijing reported three cases of Covid deaths over the weekend and the southern city of Guangzhou locked down more districts. Shijiazhuang, a city near the capital that was rumored to be a test case for reopening, tightened restriction and ordered mass testing.

Bond selloff is likely over, and China’s further reopening will be “data dependent,” said Zhaopeng Xing, a senior strategist at Australia & New Zealand Banking Group. That means the country should tighten curbs to control the Covid outbreak first.

That said, optimism toward China bonds may be restrained by limited room for additional monetary easing. Chinese banks kept one- and five-year loan prime rates unchanged on Monday after the PBOC signaled concerns over the outlook on inflation in its monetary policy report last week.

China’s 10-year government bond yields dropped two basis points to 2.81% on Monday, while onshore yuan slid 0.6%. Overnight repo rate, a gauge of short-term borrowing costs among banks, fell 22 basis points to 1.10%, lowest in more than a month. Top-rated local corporate bonds rallied, with yields dropping about three to four basis points, according to traders who asked not to be named.

--With assistance from Lorretta Chen and Qingqi She.