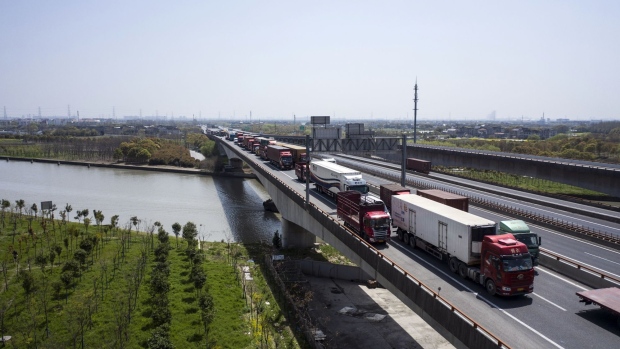 Trucks wait to pass through a checkpoint on a highway leading from Shanghai, China, on Wednesday, March 30, 2022. Shanghai's lockdown will have even greater ramifications for China and the world than the already significant impact from the lockdown in the tech hub of Shenzhen, according to Bloomberg Intelligence. Photographer: Qilai Shen/Bloomberg , Bloomberg News

(Bloomberg) -- China’s roads are showing some signs of life after a torrid period of virus lockdowns that crushed activity, potentially offering a boost to global oil demand even as uncertainties remain.

There are more trucks on China’s highways than a month ago, while Shanghai’s peak-hour traffic congestion has edged higher as the city cautiously emerges from a prolonged lockdown. An ongoing outbreak in Beijing, a flareup in the auto hub of Tianjin, and a ballooning cluster in the central province of Sichuan indicate the fragile demand recovery could easily be derailed.

Virus restrictions hammered China’s economy and sapped its oil demand last month, leading to refiners processing the least amount of crude in two years. The country’s worst outbreak since the Wuhan lockdown in the early days of the pandemic has capped surging oil prices, which jumped following Russia’s invasion of Ukraine in late February.

Shanghai on Thursday found the first cases of Covid-19 outside of quarantine in six days, raising concerns that the easing of its lockdown could be impacted. China is the world’s biggest crude importer.

A rebound in China’s fuel demand hinges on “virus-combating efforts, which is hard to predict,” said Chaohui Guo, an analyst with Beijing-based investment bank China International Capital Corp. High-frequency data is still “very weak” year-on-year, he said, adding that there are some signs of a recovery on a month-on-month basis.

There were 7.37 million trucks on China’s highways on Wednesday, compared with 7.19 million on April 21, according to a notice from the Ministry of Transport posted on its Wechat account on Thursday. The ministry cited data monitored by a State Council working group on logistics, which started tracking national supply chains last month.

Shanghai’s peak-hour congestion levels on May 19 were 7% higher than April 6, when a city-wide lockdown was first put in place, according to data from Baidu Inc. In Beijing, congestion was 3% higher than May 5 when one of its largest districts was put under movement restrictions.