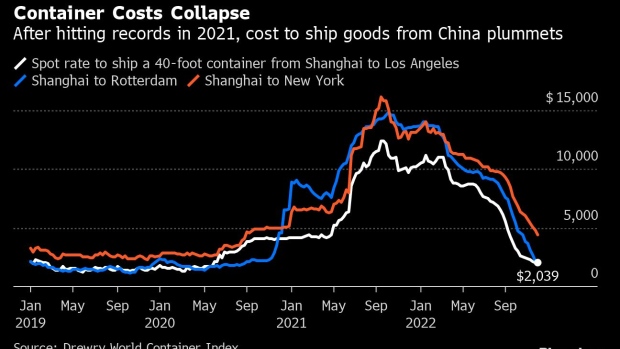 (Bloomberg) -- China’s exports and imports both contracted at steeper paces in November as external demand continued to weaken and a worsening Covid outbreak disrupted production and cut demand at home.

Exports in dollar terms fell almost 9% in November from a year earlier, the General Administration of Customs said Wednesday — the biggest contraction since February 2020 when trade was hit by the first Covid lockdown.

The value of exports fell to $296 billion. That was the lowest level since April, when the lockdown of Shanghai closed factories, shut roads and stopped companies from putting goods on ships.

The slump comes during a time when exports would normally be rising strongly ahead of the Christmas and holiday season overseas. The decline in imports also widened to 10.6%, leaving a narrower trade surplus of $69.8 billion last month, the data showed.

“Weakening domestic and foreign demand, Covid disruptions and a rising comparison base lead to a perfect but well-expected storm to China’s exports and imports,” said Bruce Pang, chief economist and head of research for Greater China at Jones Lang LaSalle Inc.

The worsening trade performance is undermining a strong pillar of China’s economy over the last two years. Record rises in exports provided Chinese firms with stable demand, even as domestic spending struggled due to a housing collapse from last year and then increasing Covid outbreaks and lockdowns this year.

The government is now looking to loosen the Covid Zero policy to reduce its impact on the economy, but policymakers may need to add more stimulus. The Politburo, the ruling Communist Party’s top decision-making body, said it would seek an economic turnaround next year by pledging to keep fiscal policy active and monetary tools targeted and “forceful,” according to a readout of its latest meeting Wednesday.

The uncertainty in how much net exports will contribute to economic growth next year is why the Politburo “vowed to focus on expanding domestic demand and give full play to the fundamental role of consumption and the key role of investment,” Pang said.

Stocks in Hong Kong and China had a volatile Wednesday, but were boosted in the afternoon by further relaxation of Covid Zero rules announced by the government. The Hang Seng Index was up 1.4% as of 1:32 p.m. The onshore benchmark CSI 300 was up 0.7%, following earlier losses.

The drop off in overseas demand is likely to continue for the next few months at least, with few signs of a pickup in global demand. January is a historically weak month due to the Lunar New Year holiday period, which shutters most Chinese companies for weeks.

“We expect that containerized export volumes will remain under pressure through the end of the first quarter of 2023 at least,” said Daniel Richards, an associate director at maritime consultancy Maritime Strategies International Ltd.

While “there will likely be a seasonal uplift” in the first half of January before the holiday shutdown, he said, that’s unlikely to be strong by historical standards.

Orders to Guangzhou GL Supply Chain Co. — which makes everything from gardening tools to Christmas-themed storage bags — have been down in the last three months some 20% compared to last year, according to Chen Zijian, a sales manager at the firm. The company mainly exports to the US and Europe.

While that figure is better than the 50% drop-off in orders in the first half of the year, the outlook isn’t strong.

“If consumer prices continue to remain so high in western countries, it will still be very difficult for us because we make non-essential products,” he said this month. Local media has reported that rapidly shrinking orders are prompting many Chinese factories to shut down earlier than usual ahead of the Lunar New Year.

Some suppliers for Shaoxing Gaobu Tourism Products Co. — an exporter of beach umbrellas and tents — have already let workers go home for that holiday in late January, according to representative Lian Xuji.

“The number of orders received this year is incomparable with the levels in the past two years,” Lian added, citing increasing competition from other manufacturing nations. Southeast Asia is already returning to post-pandemic normalcy, giving factories in those countries a boost.

Chinese firms, meanwhile, have also faced difficulty remaining open as Covid spreads and local governments try to manage the transition from Covid Zero to the sudden emphasis on easing and reopening. Car, mobile phone and industrial goods manufacturers have had to stop or slow production to deal with workforce and supply chain disruptions.

In the first eleven months of the year, exports of home appliances fell the most from a year earlier, down 12.6%, according to a breakdown provided by the customs authority. Despite the slump in overall exports, outbound shipments of cars and chassis were still robust, growing 73.1% in the January-November period on year. Exports of rare earths also jumped, up 68.7% from a year earlier in the January-November period.

The fall off in demand has been seen clearly in the slump in the cost to ship goods from China, where prices are back at the level of mid-2020, before they spiked due to the surge in exports and the tangled supply chains of the last two years.

“I expect exports will stay weak in the next few months as China goes through a bumpy reopening process,” said Zhang Zhiwei, president and chief economist at Pinpoint Asset Management. “As global demand weakens in 2023, China will have to rely more on domestic demand.”

China’s economy likely slowed in November on a worsening Covid outbreak, a set of early indicators tracked by Bloomberg showed, and that may continue into this month if disruptions to movement and production continue. Economists now see the economy expanding by just 3.2% this year, while the steepening drop in imports indicates that domestic demand remains weak.