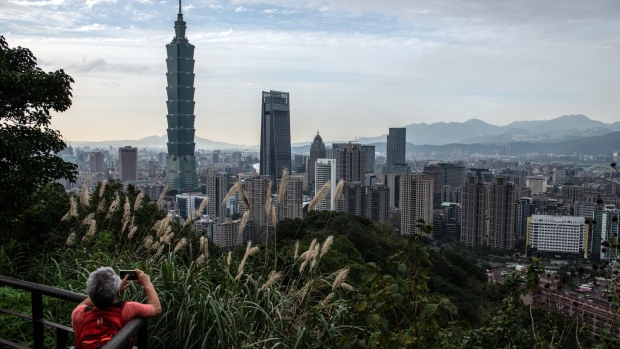 TAIPEI, TAIWAN - JANUARY 07: A man photographs the Taipei 101 tower, once the worlds tallest building, and the Taipei skyline from the top of Elephant Mountain on January 7, 2020 in Taipei, Taiwan. Taiwanese will go to the polls on Saturday after a campaign in which fake news and the looming shadow of China and its repeated threats of invasion have played a prominent role in shaping debate. Ensuring Taiwans democratic way of life has dominated an election which will be closely fought between incumbent, anti-China president Tsai Ing-wen and the more pro-Beijing challenger Han Kuo-yu. (Photo by Carl Court/Getty Images) , Photographer: Carl Court/Getty Images Europe

(Bloomberg) -- Authorities in Taiwan carried out raids and questioned a group of people on suspicion they were buying votes on behalf of China in Saturday’s island-wide election.

Prosecutors have said that evidence seized during a raid earlier this month linked to the same group indicated that funding from China was being funneled to candidates, said CNA, which receives financial backing from the Taiwan government.

CNA didn’t name the suspects or say which candidates were involved. The Taiwan Affairs Office, China’s government body for handling ties with the democratically run island that Beijing has pledged to reclaim one day, didn’t respond to a request for comment.

Taiwan voters head to the polls Saturday to pick mayors and county leaders in a race that both the Kuomintang and Democratic Progressive Party hope will give them an early edge for the next presidential election in 2024. President Tsai Ing-wen will have to step down after serving two four-year terms.

The Anti-Infiltration Act prohibits certain political donations and lobbying, interfering in elections and disrupting the public on orders from outside Taiwan. The law is largely aimed at China, which officials in Taipei have accused of running disinformation campaigns targeting the island’s 23 million people.

--With assistance from Jing Li.